The Star Sydney Casino and Hotel isn’t as big as the Crown Casino in Melbourne, but it is still considered to be one of the best land-based venues in Australia.

While it overlooks Sydney’s stunning Darling Harbour, you won’t be looking at the view with the array of gaming facilities the Star Casino offers, as well as all the entertainment on display.

History of the Star Sydney Casino

The Star Casino was originally known as the Star City Casino and the applicants, Leighton Properties and Showboat, were initially granted a temporary license in 1994. In 1995, a temporary casino was opened by Acting Prime Mister Kim Beazley, and then in 1997 the permanent casino opened. 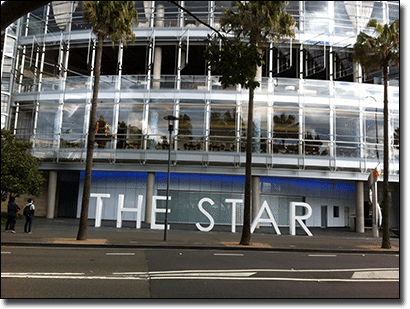 For over a decade it thrived as NSW’s only casino, and it wasn’t until 2009 that it was announced that Star City was to undergo a $475 million renovation plan, featuring a new entrance and repositioning, as well as another drop-off zone on the harbour side. While the project wasn’t completed until 2012, it opened in 2011 under the new name of ‘The Star’, which it remains today.

The casino is owned and operated by the Star Entertainment Group – formerly Echo Entertainment, which was created in 2011 to manage Tabcorp’s casino affairs.

There are two main gambling floors within the Star Casino that total 104,450 square feet and feature a general admission gaming floor and a high roller floor with bigger table limits. The latter room is known as the Sovereign Room and features yet another area, known as the ‘Inner Sanctum’, for even higher stakes.

The Star has reportedly added yet another area in the Sovereign Room called the Vermillion Room that is VIP invitational only.

There are 1500 gaming machines within The Star, ranging from classics to video slots and even progressives. This huge number is made up of mostly pokies, but there are also an array of electronic roulette and bingo games too.

There are around 200 gaming tables with both traditional and variants of the following titles:

While Two Up was originally available at Star Casino (then Star City), it was removed in 2003 as it wasn’t viable due to the requisite of three dealers and two supervisors.

Other games such as Double Chance and 3 Card Baccarat have also been trialled, but neither were very popular and both were removed shortly after their inception.

We mentioned the poker variants above in the table games category, but we also want to mention that there are 20 tables in a dedicated live poker area on the main gaming floor. Such a setup has seen The Star host events on the Australia New Zealand Poker Tour (ANZPT) quite regularly.

The casino offers an array of promotions, so if you are planning on visiting The Star regularly sign up for the Absolute Rewards and the Star Club program for free at the information desk. This will see points added to your card every time you play and enter you in prize draws to win trips, cars and more.

The Star Casino doesn’t just offer extensive gaming facilities, rather it also offers an array of restaurants and bars.

There are 16 restaurants, including the Star’s Garden Buffet and a number of privately owned options for both fine dining and casual eating.

There are a total of eight drinking holes throughout the venue, including a 24/7 sports bar that has 50 LCD televisions, a 34 square metre LED screen and a paperless TAB facility.

There is also a nightclub – the Marquee. It opened in 2012 with VIP tables and regular acts, and requires a $30 entry fee – money which may be better spent on the tables if you aren’t a fan of the clubbing scene.

The 2000 seat Sydney Lyric theatre hosts concerts, musicals, theatre, opera, ballet and more, including popular shows such as The Lion King and Legally Blonde: The Musical.

There is also a health spa and retail collection for those who want to mix pampering with their gambling.

The Star Casino is one of Australia’s best casinos, and the only one in New South Wales, but that may only be until 2019 – the scheduled opening for James Packer’s Crown Sydney project at Barangaroo.

For online alternatives, read out the online gambling laws in NSW.