Up-and-coming casino game software developer Rabcat are taking the iGaming industry by storm and turning heads with their top quality online slot games. We take a look at the Rabcat brand, the games it has created and discover where you can play Rabcat games for real money at the safest casinos on the Web.

Rabcat is an Austrian company, with headquarters in Vienna, established in 2001. While the company specialises predominantly in slots and video poker, it caters to both online and offline casinos, creating instant win games for land-based venues. With experience in both fields, the software developer definitely has an edge when it comes to attracting land-based players to an online market. Rabcat is also part of the win2day network which is incredibly popular in Austria, featuring an online casino, poker room, lottery, and even a bookmaker. However, it wasn’t until 2012 when the software developer really made a name for itself.

This recent popularity could be perhaps due to their partnership with Microgaming, though their ability to produce top-notch slot games has definitely helped. Therefore, we delve into the history, and future potential, of Rabcat as an iGaming software provider, all the while referencing some of their best work.

While Rabcat was established over a decade ago, it still hasn’t caught up to the likes of Net Entertainment or other leading software developers in terms of reputation. However, through the integration of the Quickfire platform via Microgaming, the software developer has definitely made the move to get noticed.

This move kicked off in 2012 when Rabcat signed on with Microgaming’s distribution platform Quickfire, though it wasn’t until 2014 when things really took off. Releasing their first slot, Castle Builder, on the Quickfire platform, the success saw a new deal which meant Rabcat’s slots would be rolled out across all of Microgaming’s platforms, as well as the online operators which Microgaming supplies.

This has seen many of their games available at the downloadable Microgaming casinos, as well as on instant-play casinos via browsers, such as Firefox, Google Chrome, and Safari, and even on the HTML5 platforms, made specifically for smartphone and tablet users. This deal has seen many new releases hit the multiple platforms since 2014, and their success have proved Microgaming made the right move.

With Microgaming leading the way in the iGaming industry, it can seem a little unusual to add Rabcat games into their catalogue. However, Microgaming never really made it with their 3D slots, such as their Sterling Silver 3D slot which required 3D glasses, and when you play Rabcat’s slots you will understand why the addition makes sense.

The 3D graphics are what really set this game apart from everything else available on the market, and thus it is a smart move on Microgaming’s behalf, to keep up with the competition. Each poker machines also offers video animations which occur when wins are triggered which light up the reels and make the experience even more unique due to these high quality 3D graphics.

We have included the first three here so you can see how Rabcat have successfully entered a hard market and even grown due to listening to player’s feedback. 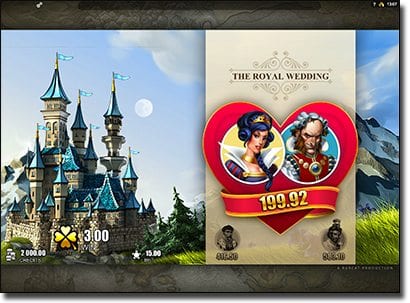 This 5 reel and 15 payline slot game was the first to be unveiled by the pair of software developers and has been received overall quite well, though it allowed for improvements.

Castle Builder takes us to a medieval world and we find ourselves exploring four kingdoms and their royal weddings. While we have the backstory down, we are actually following the name of the slot and building castles for the kingdoms, which is located to the left of the screen.

On the right are the reels, with royalty, treasure, jewellery and more, lining them. The Wild symbol which is the Old Builder, substitutes for all other symbols, except for the Building Material symbols (and not Scatter symbols). Interestingly, there are no Scatters which makes this slot game quite unique.

The building symbols however are what you need to land upon each spin, with each coming in a standard version, as well as a bronze, silver, and gold type, with gold Building Symbols being the best to spin. Spin two to five building symbols and depending on which you spin your progress will increase accordingly and it will be indicated on the building progress indicator on the top left of the screen.

When you have finished building the castle you will be able to pick from three princes for the princess, and to get the max payout you will need to pick the one who is the wealthiest. You can also see how much you can earn, which increase as you are building, by looking at the three question marks below the building progress indicator.

Many have found this an interesting and intriguing addition from Rabcat to the Microgaming catalogue, however the lack of free spins has deterred some. However, Rabcat definitely took this criticism on board for their next releases.

After Castle Builder gained popularity it was only fitting for Rabcat and Microgaming to continue to roll out Rabcat’s slots, and next came Forsaken Kingdom. While it took almost a year, with this slot released in March 2015, the software developers then began to pick up the pace as a result of the positive attention this game also gained.

Following on from Castle builder’s medieval theme comes The Forsaken Kingdom where we follow King Arthur and his Knights of the Round Table over 5 reels and 20 paylines.

The two bonuses are quite interesting and include the Epic Battle Bonus round, which is activated by spinning an Arthur symbol next to the Black Knight symbol on the first row, and the Eternal Love Bonus, which is activated by landing a King Arthur symbol next to a Lady Guinevere symbol on the first reels. These two bonuses allow for more chances of winning.

Then there is the Round Table of Fortune feature where players can win big by seating the knights at the round table. To do so you need to land two shields to seat one knight at the table. Once every knight is seated you can spin the table to land a potential win. The game was, and still is, quite popular and it didn’t take long for the next one to be distributed.

Just a month after Forsaken Kingdom came out, Dragon’s Myth was distributed to the Microgaming platforms. It is considered to be one of the most popular Rabcat slots, though they are all quite popular.

Dragon’s Myth is yet another fantasy themed slot, and follows a heroine who sets out to capture four dragons roaming the reels, which are on a backdrop of eery mountains. Help her and you trigger a potentially large payout. Rabcat have kept the free spins in play again, which is another indicator the software developer listened to the critics of their first release on the Quickfire platform. Land three to five Scatter symbols, which is the Dragon’s cave symbol, on Dragon’s Myth to score from 10 to 20 free spins, respectively. Here, if bonus symbols appear you will be taken to the dragon’s cave and will be awarded with three extra spins as well as a Fixed Wild to trigger more wins.

There is also a Dragon Bounty bonus where players can spin and land Dragon symbols. These will light up one of the four spaces located at the bottom right below the reels, as you do. Once all four have been lit you will trigger a win.

They’ve even added in the popular Microgaming Gamble feature to this slot, which truly shows the partnership in play, as well as the growth by Rabcat in terms of their games. Here you can double your winnings by picking whether it will be a yellow or blue dragon egg, similar to the red or black Gamble option in many Microgaming slots.

Other Rabcat and Microgaming slots

Rabcat and Microgaming have continued to take into account what their players want, as per the free spins response with their Castle Builder slot. They have developed the following successful and creative slots which all offer incredible 3D graphics to make playing the slots even more fun. We can only expect even better things from the partnership, as well as Rabcat independently, in the future.

Where do I play Rabcat developed games?

Many of our favourite online real money casinos we recommend host Rabcat-developed slots and games – our top pick for new players and slots enthusiasts looking to check out this up-and-coming studio’s excellent games are listed in the casino table at the top of this page. Use our links to sign up directly with the casino sites or read our detailed reviews to learn more about what each venue has to offer.