If you’re unfamiliar with how a slot machine works, it can be a little difficult to understand why some spins pay up and why others don’t. Let us explain how real money slot payouts work, from bet lines to pay charts to all the different ways you can win.

These depend entirely on the type of game you are playing. Vintage three-reel slot machines tend to feature much simpler symbol sets – Sevens, Gold Bars, Cherries, et cetera – which pay according to the chart beside the reels. Modern video slots, however, tend to feature three types of symbol:

Royals – Standard poker symbols (10, Jack, Queen, King, etc.) which boast no special properties. These are the least valuable icons, requiring a minimum of three matches for a payout.

Characters – The more valuable standard symbols are often inspired by the game’s theme, taking the form of specific characters or objects (especially in the case of licensed slot games). These work just like royal symbols – you need three or more to win – except they tend to pay quite a bit more.

Features – These are the special symbols which make advanced slot games worth playing. Common slot features include wilds, which can substitute for other symbols; multipliers, which can double, triple, even quadruple any line wins; and scatters, which pay from any position and multiply wins by the total bet staked. You often only need one or two symbols for that special feature to take effect.

Most slot games use paylines – also called bet lines or win lines – to determine winning combinations. Symbols must fall on an active payline pattern in order to win.

For example: let’s say we are playing a simple fruit machine with a single, horizontal bet line. In order to get a payout, a symbol combo must land on the line that runs through the middle of the reels.

Slot bet lines come in all shapes and sizes, from straight lines to horizontals to zig zags. Some slot machines have as many as 100 lines, while the simplest games feature just one. Each line holds three or five symbols, depending on how many reels the game uses.

Besides determining what wins and what doesn’t, paylines may also shape how much money players can bet per spin. Standard payouts (a.k.a. line wins) are calculated according to how many credits you wager on each line. For example: if a combination pays 10 coins and we are playing five $1 credits per line, our return is: 10 x 5 = $50.

Some games let you pick and choose which pay lines you wish to cover, while others require you to play all lines by default. Selecting fewer lines gives you fewer potential wins per spin, but it also opens up options for players who want to bet more per line (which means bigger payouts) without increasing the total stake.

The vast majority of online slot games employ the traditional left-to-right payment method, whereby combinations only pay up when they start on the first reel. So even if you land four of a kind on an active line, it will only count if the pattern begins on the very left of screen.

For example: three Kings on reels one, two and three (from left to right) would win; however, the same combination on reels two, three and four would not pay at all. 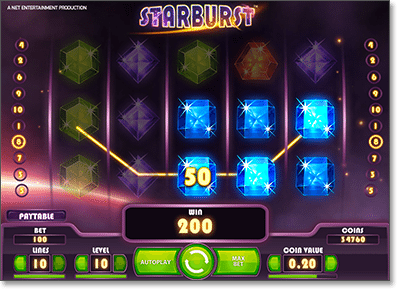 There are a few exceptions to this rule. Some games allow you to make paying shapes from either end of the reels, so you can win with left-to-right and right-to-left patterns alike. The popular Starburst online slot game by Net Entertainment uses this kind of payout system. There are also a handful of advanced slots online which eschew the conventional reel format in favour of Tetris-like setups which pay all possible patterns in any direction, such as BetSoft’s innovative SugarPop slot.

While payline slots remain extremely popular with online casino players, there is a newer system which dispenses with betting lines altogether. These games are known as ‘all ways wins’ slots because they automatically activate every possible winning combo per spin, no matter how much or how little you stake.

Whereas payline games require you to land symbols in specific patterns, all-ways slots pay up regardless of where each active symbol finishes on the reels. That means you win as long the pattern starts on the leftmost reel and features the required number of parts on consecutive reels (e.g. three matching symbols on reels one, two and three).

The most common variant is the 243 ways slot, so called because five reels and three rows of symbols offer 243 possible winners per spin. These are very popular at the leading Microgaming casino sites. Other formats include 1043 ways to win (5 x 4 reels) and the much rarer 3125 ways slots (5 x 5 reels).

How to find slot paycharts

Every real money slot game comes with a paychart which shows all the possible wins for each symbol. You can view this information by pressing the ‘View Pays’ or ‘Payout’ button, which is situated near the betting options on most online video slots.

For example, this is the pay chart for the popular Thunderstruck slot game by Microgaming: 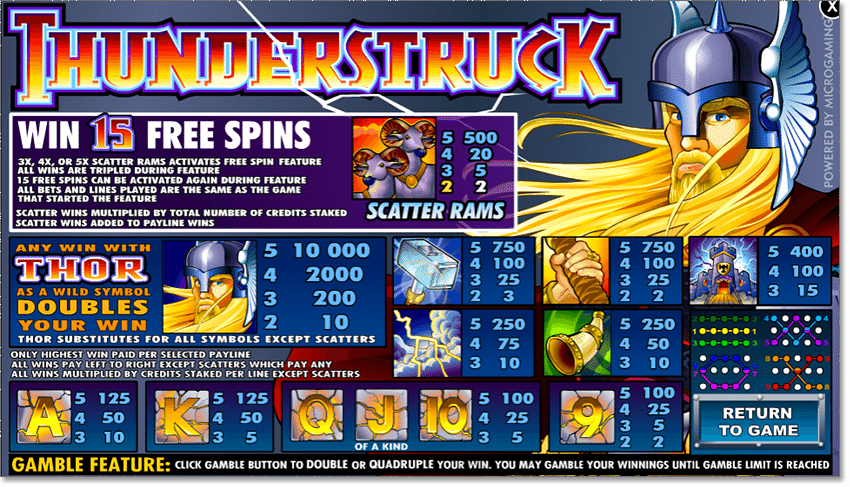 This screen gives you all the payout rules and essential info for every symbol in the game. It also explains how special features work, such as the Thor’s Hammer wild multiplier. In the bottom right-hand corner you can see the payline schedule, showing the path of all nine bet lines on the Thunderstruck slot.

Our top-rated casinos online feature hundreds of real money games with a variety of different payout schemes. Check out the range at www.SlotsMillion.com.