Thunderkick are one of the young up-and-coming software companies that are driving the iGaming Industry forward. Their approach to creating games could be written as “we do things differently” and it’s refreshing with companies like Microgaming and NetEnt dominating the space for many years. Thunderkick has pushed many boundaries, with the developer changing the aesthetics and format of slot machines to really set them apart from their competitors. This is why they have garnered a solid reputation in such a short amount of time.

Thunderkick was only established in 2012 but have quickly made a name for themselves. The company is based in Stockholm and sees a small team behind the small, but unique, portfolio of slots. The company is licensed by the Malta Gaming Authority, which is the same licensing body that governs Microgaming and other leading software developers. The main aim of Thunderkick is to be unique but remain simple, and they execute this mission in every single one of their entertaining online slot machines.

Thunderkick specialise in 3D slots, but they put their own spin on things. We’ve provided an overview of some of our favourite Thunderkick slot games to give you an idea of what you can expect from this innovative casino software.

Flux is a 3D slot machine set in space and interestingly it visually lacks any type of reels, although its inner workings features five of them with 15 paylines. Additionally, the graphics are crisp and the gameplay is smooth. Flux features Stacked Wilds and the chance to win both ways, but the Free Spins feature is what makes it really unique as it is quite original. To activate, spin at least three bonus symbols and you will be given a choice in accordance to the number of bonus symbols you have scored.

If you have spun three bonus symbols you can pick from the following:

If you have landed four Bonus symbols you can choose from:

If you have spun five Bonus symbols you can choose from: 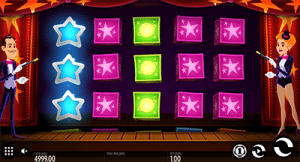 Magicious is another 3D visual delight, once again appearing to lack any real structure in terms of reels, but it actually offers five reels and 10 paylines.

Set against an old theatre with a magician and his helper hanging by the side of the reels, while the symbols that are all different coloured boxes fall as you press ‘spin’. The slot offers wins both ways, and the main feature is the Expanding Wilds that offer a re-spin when they are spun. Only appearing on reels 2, 3, and/or 4, the Wild will expand to cover the entire reel, and you will be rewarded with a free re-spin, where the Expanding Wild will stick around. The more expanding Wilds you spin the more re-spins you will earn.

There are a few Mexican-themed slots out there but none as graphically beautiful as this slot. Based on the Mexican holiday The Day of the Dead, Esqueleto Explosivo features 17 paylines across five reels, though once again these reels appear to be non-existent and the symbols, which are colourful skulls, appear to be stacked on top of each other.

The best thing about this slot is the huge 32x multiplier you can earn by spinning consecutive wins. The first win starts at a 1x multiplier the second at a 2x multiplier, the third at 4x multiplier, and so on, right up to a 32x multiplier. There is also the Explosivo Wild that will blow up eight surrounding symbols when it appears and new symbols will fall into place. This will also see the multiplier move to the next step, for example if you were on 4x it will go to 8x.

While the catalogue is quite small, each slot features incredible detail in terms of both the graphics and gameplay.

Where to find Thunderkick games

To find the entire range of Thunderkick slots, head to Slots Million. You will also find over 1,700 other slot games to choose from, and if you are a new player you can take advantage of a welcome bonus package of up to $/£/€100 matched by 100% on your first real money deposit (wagering requirements apply).