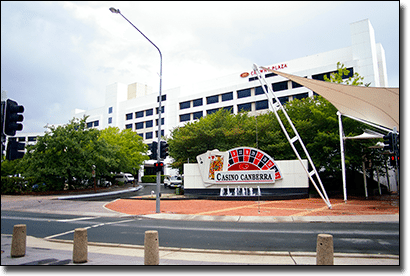 Located in the CBD of the Australian capital, Canberra Casino was the first legal casino to be opened in the ACT.

Unlike nearly all of the other casinos in Australia, the complex does not offer a hotel, theatre, or any retail stores. It is quite small in comparison to other land-based gambling venues, although a proposed $330 million upgrade is set to change this.

Due to local legislation, the casino does not offer any poker machines (more on that later). Regardless, it offers a variety of table games and TAB betting facilities, and also regularly hosts top-class poker tournaments.

A temporary venue was opened in 1992 after the Federal Government issued the Australian Capital Territory’s first (and so far only) casino license to Casinos Austria International – current operators of The Reef in Cairns, Queensland.

It wasn’t until 1994 that the permanent casino was established. Notable guests at the launch included former Prime Minister, Bob Hawke, who actually won the golden roulette ball from the first roulette wheel spin in the temporary casino.

The Aquis Group, which is run by Hong Kong billionaire Tony Fung, took over the casino in 2014 and announced a $330 million renovation plan the following year. The project is set to be completed by 2018 and will include two hotels as well as an array of new bars, cafes and retail stores. There are also hopes of adding poker machines into the mix.

The Canberra Casino gaming floor is only 38,000 square feet – less than half the size of the 104,450 square feet gaming floors at Star Casino in Sydney, by comparison. There are plenty of gaming options nonetheless, from baccarat to roulette to poker, but pokies players will have to look elsewhere for the time being.

Casino Canberra is the only Australian venue of its kind that is not licensed to operate pokies machines. The casino’s operators have campaigned for a law change since the very beginning, but the ACT has stood firm time and again due to concerns over draining revenue from Canberra’s clubs and pubs.

The battle has continued with Mr. Fung and Aquis, as the inclusion of slot machines is central to their big-money renovation plans. Their efforts have led to a breakthrough in May 2016, when an agreement in principal was reached that would see Casino Canberra take over the existing licenses for up to 200 pokies games.

With no pokies to offer (yet), Casino Canberra specialises in both modern and traditional table games. There are 39 gaming tables to choose from, as well as electronic terminals for live dealer blackjack, baccarat, roulette, sic bo and more.

Casino Canberra offers a dedicated poker room for head-to-head games and live tournaments. Every Saturday players can participate in No Limit Texas Hold’Em tournaments, featuring a buy-in of $60, with the top three at each table scoring cash prizes.

There are also weekly Sit & Go events, Turbo events and more at a variety of buy-in limits. For more information, check what’s on under the ‘Poker‘ category on the Casino Canberra website.

As with every land-based casino in Australia, or worldwide, we recommend signing up to the loyalty program at Casino Canberra if you plan on visiting regularly – or even if you plan to spend big within the one night.

Formerly known as the Senators Club, the Advantage loyalty program rewards members with perks like discounted parking, complementary dining, hotel accommodation at the adjacent Crowne Plaza Canberra, tournament invitations and free casino play. You can also qualify for custom gifts and other rewards on special occasions, including your birthday.

To join the Advantage rewards scheme, simply visit the Casino Canberra reception desk and sign up.

Despite its current lack of shops, theatres and on-site accommodation, there are still a few non-gaming options to keep you entertained at Canberra Casino Australia.

There is just one restaurant at Canberra Casino – Natural Nine, which offers a locally sourced, budget-friendly menu from the award-winning chef Chad Ogden. It is open for lunch from midday to 2:30pm seven days a week, and for dinner from 5:30pm.

Casino Canberra offers two sports bars, the bigger of which is located on the gaming floor. With all the major sporting events live on the big screen, including AFL, NRL, golf, basketball and more, you will be able to enjoy a drink, catch the game and have a bet at the TAB all at once.

The casino complex used to have an after-hours hangout called the Galaxy Nightclub, but it closed in October 2015.