At RealMoneyCasinoSite.com, it goes without saying that our preference lies with online gambling. However, that doesn’t mean that we shy away from land-based casinos entirely.

We love a good bricks-and-mortar gaming venue and the pulsating energy of punters, tourists and revellers. Whether it’s a night out with mates, a solo mission to the blackjack tables, or just throwing a lucky coin into a favourite poker machine, there’s nothing quite like the live casino experience.

Although Australia is no Las Vegas, we are lucky to have some truly world-class gambling facilities all over the country. If you’re within driving range of an Australian capital city, a night out at one of these fantastic casinos is but a cab ride away. If you’re elsewhere in the world, check out our guide to the world’s most famous casinos or read our gambling holiday itinerary for inspiration.

If you’ve never set foot in a land based casino before, one of our writers wrote a story about their first casino experience to give beginners an idea of what to expect. 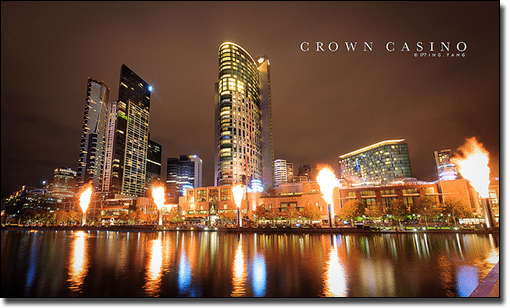 Located on the banks of the gorgeous Yarra River, Melbourne’s Crown Casino and Entertainment Complex is the largest gaming venue in the entire Southern Hemisphere. As the host of the annual Aussie Millions and the Asia-Pacific World Series of Poker tournaments, it is a highly revered gambling hot spot for high rollers, recreational players and tourists from across the globe. The Southbank precinct is home to some of Australia’s most prestigious restaurants, boutique stores and high-end hotels, while the Crown complex itself boasts more than 30 eateries and watering holes. The main casino is flush with popular table games such as blackjack, Dice Duel, roulette, baccarat, craps, pai gow, sic bo, Caribbean stud, Mississippi stud, three card poker and more, while pokies players can choose from more than 3,500 electronic gaming machines. If you’re a high roller, the Crown Mahogany Room is the pinnacle of VIP gambling Down Under. 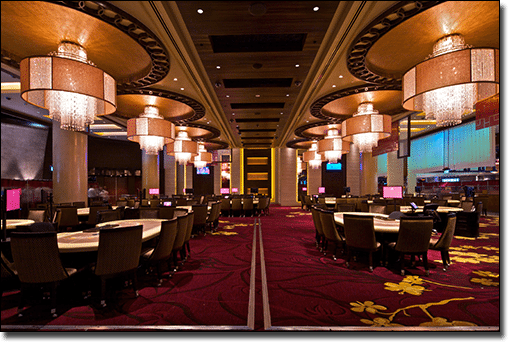 The second largest gaming complex in Australia, Sydney’s Star Casino and Hotel underwent a $1,000,000,000 refurbishment in 2009 to ensure its facilities were as stunning as its prominent Darling Harbour location. Currently the only live casino in New South Wales, The Star treats punters to a five-star experience with two gambling floors, seven restaurants, eight bars, over 350 luxury hotel rooms, 130 private apartments and the 2,000-capacity Sydney Lyric Theatre. The main gambling floor offers traditional casino games like blackjack, roulette, Dice Duel, Australian pontoon, craps and sic bo, along with a wide range of video pokies and other electronic games. The new Star Poker room promises to be one of the country’s best live hold’em poker destinations, while high-stakes gamblers can’t beat the majestic harbour views and elegant trappings of the VIP Sovereign Room. 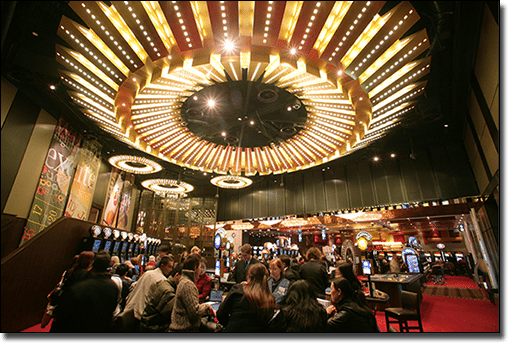 Situated within the heritage-listed North Terrace railway station and overlooking the picturesque Torrens River, Adelaide Casino and its surrounds make up one of the city’s premier tourist destinations. Although technically renamed as Adelaide Casino in 2009, the venue is still run by the SkyCity group and is referred to as such by locals. The casino houses over 1,000 pokies and more than 100 table games, including commission-free baccarat, roulette, blackjack, free bet blackjack, poker, Caribbean stud, money wheel games and electronic Rapid Roulette and Rapid Blackjack terminals. It is also a thriving nightlife and entertainment hub with renowned restaurants and drinking spots such as Barossa, Chandelier Bar, Madame Hanoi, Sean’s Kitchen and Oasis. Already the 10th largest employer in Adelaide and contributing around $30 million annually to the South Australian economy, the casino is poised for a $300 million redevelopment that will add new gaming areas, bars, eateries and 80 luxury hotel rooms. 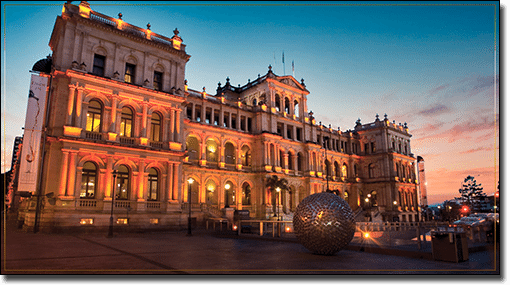 Operated by the ECHO Entertainment Group, the Treasury Casino and Hotel complex is housed within two stunning heritage-listed buildings in the Brisbane CBD: the Treasury Building and the Lands Administration Building. The Treasury opened its doors in 1995 and remains a popular destination for locals and tourists alike, with a world-class hotel that’s only 25 minutes from Brisbane’s international airport. The casino also houses four bars, six restaurants, a nightclub, big-screen sports bar facilities and an open-air cinema. There are more gambling facilities within the Treasury Casino than any other venue in Queensland, with over 80 gaming tables and in excess of 1,300 real money pokies machines. 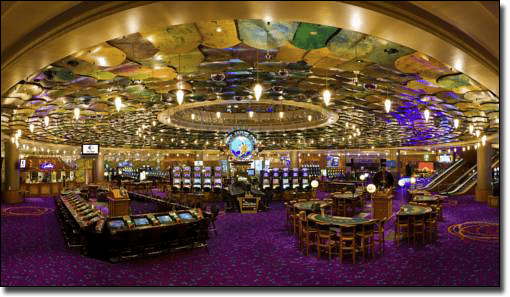 Given Cairns is one of Australia’s most popular tourist destinations, it should be no surprise that The Reef Hotel Casino is awash with holidayers, honeymooners, wanderers and wayfarers from all corners of the globe. As one of only two casinos in northern Queensland, it’s also a hit with local (and localish) punters. The Reef might not be the country’s largest gaming complex, but it offers everything you could want in a casino; classics like mini baccarat and midi baccarat, blackjack, roulette and sic bo are all accounted for, along with local specialties such as Reef Routine and Paradise Pontoon. There are also over 500 pokies, a keno lounge and a huge TAB sports betting hub. Punters can take a break from gambling at four bars featuring outdoor smoking areas and big-screen televisions, plus nightclubs, restaurants and a cocktail lounge.

Located in the vibrant Gold Coast suburb of Broadbeach in close proximity to the world-famous Surfers Paradise, Jupiter’s Casino is a much-loved destination for tourists and dedicated gamblers alike. Sitting alongside the Nerang River, Jupiter’s was the state’s first casino and is now connected via monorail to the Oasis Shopping Centre across the road. The casino boasts over 1,300 pokie machines, more than 70 table games, VIP gamers club, five bars, seven restaurants, a stunning hotel and, most notably, its own theatre. The Jupiters Theatre underwent a $20 million facelift in 2012 and has since seen the likes of such international stage shows as ABBA Revival, STOMP and Michael Bolton. 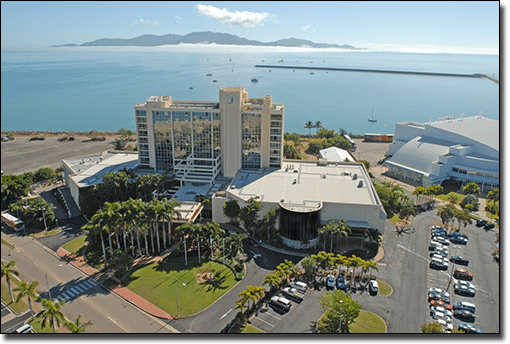 Smack bang on Townsville’s Breakwater and overlooking turquoise waters all the way out to Magnetic Island, this place is the stuff dreams are made of. The ideal spot for some casino thrills during a trip to the tropical north, you’ll find over 370 gaming machines, keno, TAB and more than 20 table games including pontoon, blackjack, roulette, mini baccarat, three card poker, Caribbean stud poker and the State Wheel. The lively complex also boasts a well-appointed hotel, a range of dining options, multiple drinking establishments and round-the-clock entertainment in the form of concerts, live music and special events. There’s also a 2,000-capacity ballroom that hosts national and international performances all year round.

Previously known as Burswood Casino, Western Australia’s premier gaming complex was renamed by James Packer in 2011 to coincide with the refurbishment of its sister site in Melbourne. Crown Perth is situated along the picturesque Swan River and, like its Victorian counterpart, houses some world-class gambling and entertainment facilities. Visitors can find over 600 hotel rooms, 32 bars and restaurants, a popular nightclub, convention centre, 2,300-capacity theatre, retail outlets, day spa, pools and riverside cycling trails. For those who only care about the gambling side of things, you’re spoilt for choice with over 1,500 electronic gaming machines plus big baccarat, mini Baccarat, live poker, roulette, blackjack, keno, sic bo, pai gow and various forms of table poker. 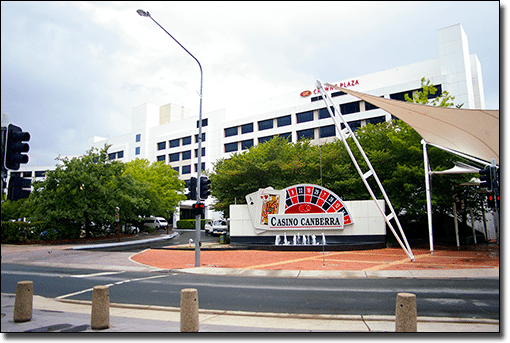 There are some distinctive differences that set the Australian capital’s only casino apart from other gambling establishments in Australia. Casino Canberra aims to provide a more intimate and sophisticated gambling venue, with 32 table games on offer and, quite remarkably, no pokies whatsoever. The main focus here is on high-quality customer care. Unlike most Aussie gambling hubs, which are usually open 24 hours a day, Casino Canberra only operates between midday and 4:00am and doesn’t include a hotel complex. You will find the Galaxy Club Retro nightclub and a couple of bars and restaurants, but you will have to look elsewhere if it’s nonstop, all-hours action you’re after. 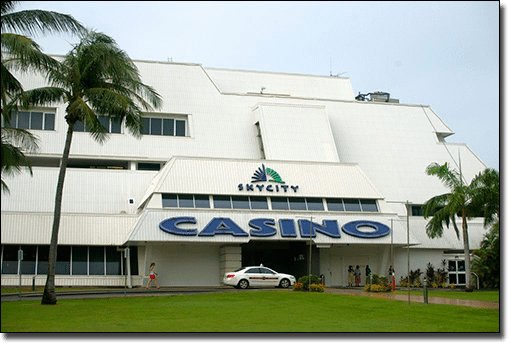 Formerly owned by MGM Grand, Australia’s northernmost casino gaming venue was bought by SkyCity Entertainment Group in 2004 and renamed as such. SkyCity Darwin is the Northern Territory’s ultimate entertainment destination, scoring an incredible location with 30 acres of tropical gardens overlooking the Arafura Sea. More than just an awesome gambling venue, the Darwin casino is home to a five-star beach resort that boasts a high-end spa, five award winning restaurants and multiple infinity pools and lagoon-style swimming areas. The casino has over 700 electronic gaming machines, 30 table games and the exclusive Skyroom for VIP players, along with seven bars to make sure a drink is never far away. 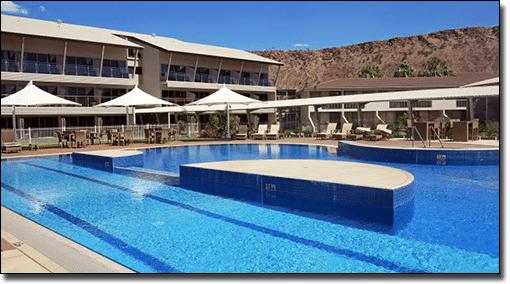 Lasseters is the only casino in Alice Springs – an exclusive position which it is licensed to hold until 2018. This casino and hotel complex marks the centre of entertainment for the regional community of Alice Springs, featuring an international-standard casino, four bars, four restaurants, a sports lounge, a night club, poolside café and luxury hotel accommodation. The complex boasts iconic Australiana views of the Todd River, MacDonnell Ranges and the Alice Springs Golf Course. The casino only operates within limited hours and offers roulette, blackjack, craps, baccarat, Texas hold’em, Omaha poker, three card poker, Caribbean stud, pontoon, keno, TAB betting and a large range of electronic gaming machines.

Opening its doors in Sandy Bay in 1973, Wrest Point was Australia’s first legal casino. Initially an architecturally renowned hotel in the mid 1900s, the casino was opened in an attempt to attract visitors to this often overlooked part of Australia. Today it is a hugely popular attraction for tourists and Hobart residents and maintains its status as the tallest building in the city. The casino offers a VIP gaming area, poker, keno, Rapid Roulette, various 21 tables and a large electronic pokies section. There are several bars and eateries, including the famous Point Revolving Restaurant, and waterfront accommodation options that range from a well-appointed motor inn to five-star luxury suites. 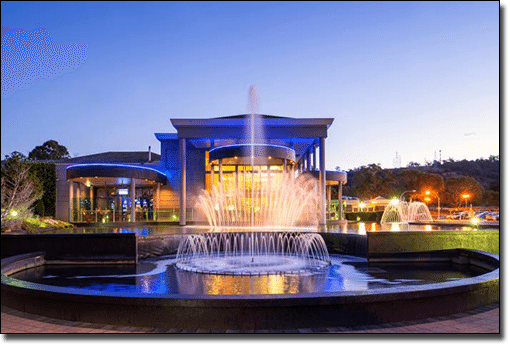 Country Club Casino is distinctly different in that the gambling element is merely an accompaniment to one of Tasmania’s most prominent holiday destinations. The Country Club itself is built on a stunning 300 acres of parkland, paddocks and lakes on the fringes on Launceston and offers a relaxing getaway for those wanting to experience the fresh air and tranquillity this part of the country is known for. But while the country club and its 18 hole championship golf course steal the show, there is plenty of quality casino gaming to be had. Blackjack, roulette and poker games abound, as do private Rapid Roulette terminals, exclusive Federal Pontoon tables and a large selection of Australian pokies games.

Land based pokies venues around Australia

If you’re just looking for a place to play the pokies and not interested in the other table games offered in a casino, there are pubs, clubs and venues all around Australia that offer a selection of electronic poker machines. Check out our statewide guides for more information: