In Australia we’re lucky to have some truly world-class gambling venues, with Melbourne’s Crown Casino often making it to lists of the greatest casinos on the planet. In the spirit of being unbiased to our home country, we’ve narrowed down our list of the five most famous casinos in the world. If you’re planning a trip that’s dripped in glitz and glamor, you may want to consider some of these truly opulent casino destinations.

Owned and operated by the Société des bains de mer de Monaco, the celebrated Casino de Monte Carlo has a rich history dating back to the days of Princess Caroline during the 1800’s and was even home to the first ever women’s Olympics in 1921. Monte Carlo Casino has featured heavily in the James Bond movies, helping to add to its appeal with foreigners. 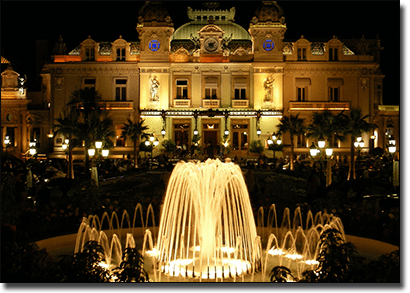 These days the casino attracts visitors from across the globe, offering both American and European table games in the most luxurious gaming rooms, hundreds of electronic gaming machines and panoramic open-air gaming terraces overlooking the bay of Roquebrune.

The lavish Monte Carlo Casino is one of Monaco’s primary sources of income, yet strangely enough local citizens are forbidden from gambling within the walls of this world renowned landmark, making it an exotic playground for foreigners.

With no shortage of famous casinos on the Las Vegas strip, The Bellagio takes the cake. Owned by the MGM Resorts Group, this extravagant site is a resort, casino, luxury hotel and entertainment complex all rolled into one elegant ball of excess. 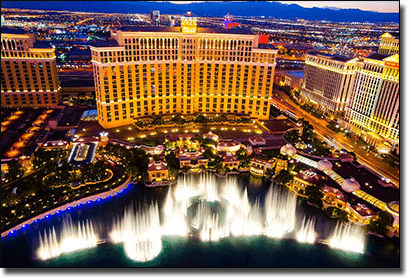 The design of The Bellagio was inspired by the lakeside town of Bellagio in Italy, hence the eight acre man-made lake that separates the casino from the Vegas strip. The Fountains of Bellagio which operate out of the lake have become a huge attraction for visitors to Las Vegas, with tourists looking on in awe nightly at the choreographed water feature with its own light and music show.

In addition to the exquisite casino and hotel fit for a King, The Bellagio also has its own conservatory, botanical garden and fine arts museum.

Sister to the original Venetian Hotel & Casino in Las Vegas, The Venetian Macau may have come second but it quickly overshadowed its predecessor. The Venetian is not only the biggest hotel building in Macau, but also the seventh largest building in the world based on single floor area and is now the biggest casino on the planet. 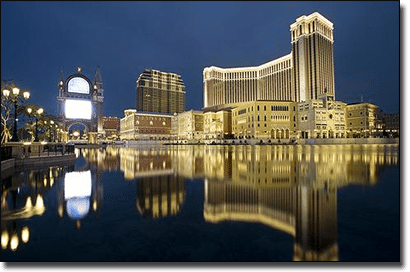 The casino has over 800 table games, over 3,400 electronic gaming machines, a 15,000 seat stadium and 3,000 luxury hotel suites over 39 floors. Like its Vegas counterpart, shops and restaurants inside the Venetian Macau are set alongside a replica of the Venice canals, complete with working gondola rides.

The Venetian Macau is also home to Asia’s first Malo Clinic which offers comprehensive medical treatments, so you can get a side of liposuction or a diagnostic endoscopy with your casino winnings.

Situated on the border of the Pilanesberg National Game Park, The Sun City Casino on the North West of South Africa has been open since 1979 with a rich and intriguing history that’s seen it flourish within many different South African political climates.

Despite the United Nations declaring a cultural boycott on South Africa during the 80’s, the Sun City Casino continued to attract such prestigious international acts as Queen, Elton John, Frank Sinatra, The Beach Boys, Rod Stewart and Cher.

When the MGM Grand opened in Las Vegas in 1993 it was the largest hotel in the world but it’s dropped back a few notches these days to secure its place as the third biggest. 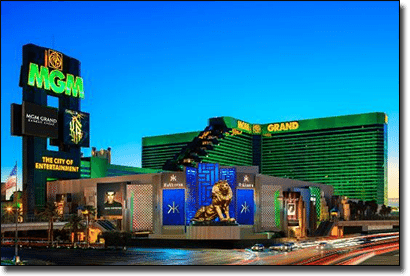 The MGM Grand Casino is the biggest casino in the Nevada Clark County region, which is saying a lot about the veracity of this renowned gambling establishment which offers thousands of pokie machines, hundreds of table games and a massive sports betting centre.

The resort offers all the fabulous excess that Vegas is famous for, including golf courses, spas, salons, nightclubs, restaurants, a CSI Experience game and until recently the casino was home to a glass-sided lion habitat.

Got any favourite casino hotspots you’ve travelled to around the world not on the list? Tell us your globe-trotting casino experiences in the comments below.