Online casinos carry a variety of real money poker games where the aim is to beat the dealer one on one. We’ll show you how to play the most popular hold’em, draw and stud poker variants at our trusted online gambling sites for the chance to win real money.

If you want to play the best casino poker games online, you need to join a safe gambling site that uses only the most respected software brands. The providers featured here boast spotless reputations when it comes to game quality and fair play, with independently tested random number generators (RNGs) and full licenses from trusted international regulators such as the UK Gambling Commission, the Malta Gaming Authority and Curacao eGaming.

While best know for its innovative 3D slots games, BetSoft is also a standout contributor when it comes to online poker variants. Online players can enjoy classics such as Caribbean Poker, Oasis Poker and Pai Gow Poker alongside quirky original variants such as Three Card Rummy and Triple Edge Poker.

Several of our top-ranked live dealer casinos use the award-winning Evolution Gaming platform, which currently boasts more than 40 real-time tables for PC, Mac and mobile. This extensive catalogue includes Casino Hold’em Live and Three Card Poker Live, both of which are available on iPhone, iPad, Android and most other smartphone and tablet devices.

Most player-versus-dealer poker games have a few essential features in common. Play begins with an ante bet, just like in a regular game of Texas hold’em, Omaha, or stud poker, and the aim is usually to draw the strongest five-card poker hand. However, specific betting rules, dealer requirements, payout tables and player bonuses vary from title to title.

The player and the dealer each receive two pocket cards, while three community cards are dealt face-up (a.k.a. the flop). The player can choose to either forfeit the hand and the ante bet (fold), or place an additional wager equal to twice the amount of the ante (call). The last two up-cards are then dealt and the hands are revealed. 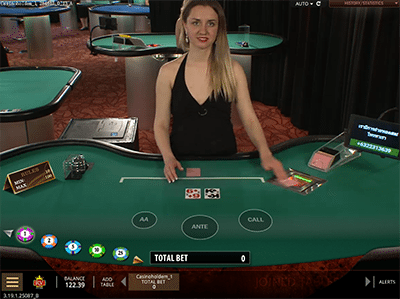 The dealer needs at least a pair of Fours to qualify, or else the player wins the ante bet by default and the call bet pushes. If the dealer qualifies, the player either wins both bets (player win), loses both (dealer win), or pushes both (tie). The call bet returns at even money, while winning ante bets are paid out like so:

There are several online poker variants which, while similar to casino hold’em, employ different betting rules and payout schemes:

TXS Hold’em – After calling or folding on the flop, players can also choose to check or bet on the turn (fourth up-card) and the river (fifth up-card). These rules are based on Ultimate Texas Hold’em – a licensed game found at many land-based casinos.

Hold’em High Poker – Unlike most holdem-style casino games, this one doesn’t feature a dealer hand. Players call or fold based on their initial two cards, after which all five up-cards are revealed at once. The top payout is a juicy 500 to 1 for a royal flush, but having to bet before the flop hurts the house edge.

Triple Pocket Hold’em – Players can’t fold, call, or raise, but they get two free hits on the deal. If you don’t like your first two cards, you can give them to the dealer and take two more; if you don’t like those, you can do it again. The best five-card combo wins, but the dealer has two hands to work with.

What casino hold’em is to Texas hold’em, Caribbean stud is to traditional five-card stud poker games. The player and the dealer each receive five cards face-down, except one of the dealer’s cards is turned face-up. The player can either fold or raise (two times the ante), after which the dealer’s remaining four cards are revealed. The house must have at least an Ace and a King to qualify, or else the player wins the ante bet automatically. Unlike casino hold’em, the Caribbean stud pay table (below) applies to the raise bet rather than the ante.

Oasis poker shares much in common with Caribbean stud, but for one significant difference: players have the option to discard and draw for an additional fee, which lowers the house edge significantly.

Unsurprisingly, a hand of three card poker starts with the player and the dealer taking three cards each. If the ante bet was taken, the punter can then opt to either fold or ‘play’ (double the bet). The dealer needs at least a Queen high to qualify, or else the player wins the ante while the raise bet is pushed. The Ante Bonus pay table awards improved returns if the player holds a three-card straight or better:

Most three card hold’em games feature an alternative betting option called Pair Plus. The rules for this wager are much simpler: if your starting hand features a pair or better, you win a payout. It can be played either separately, or in conjunction with the standard ante-play wagers. The standard Pair Plus poker payouts are:

Inspired by the old Chinese tile game, pai gow poker uses a standard 53-card deck with one Joker – a partial wild that can act as an Ace, or fill out a straight or flush draw. The player and the dealer each take seven cards, which they must split into a five-card high hand and a two-card low hand. The high hand must be of a greater poker ranking than the low hand*. The dealer’s hand is arranged according to a specific set of rules called the ‘house way’, which the player may also use. If the player beats the dealer with both hands, the bet wins at even money sans a 5% commission; if the dealer wins both, the player loses. One hand each is a push.

(* The only quirk of pai gow poker hands is that an Ace-Five run, also known as the wheel, is the second-highest ranking straight.)

Each player puts up three separate bets of equal value and is dealt three cards, while two more cards are placed face-down on the table. There is no dealer hand. At this point, the player can choose to withdraw his first bet or ‘let it ride’. The first community card is revealed, after which the player must make the same choice with his second stake. The final community card is then turned up, thus completing the five-card poker hand. 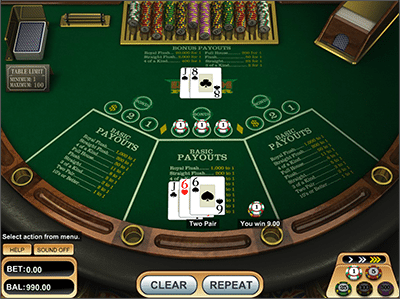 The player needs at least a pair of 10s in order to earn a payout, or else any and all bets on the table are lost. BetSoft’s Ride’m Poker game features the following standard payouts:

Where rules vary from game to game, so too does the casino’s mathematical advantage over the player. Here’s a comparison of the house edge for the games described above, listed according to both the expected loss on the initial bet and for each unit wagered. Where a call or raise is required to win the hand, the figures for each unit wagered are a better gauge of the game’s value.