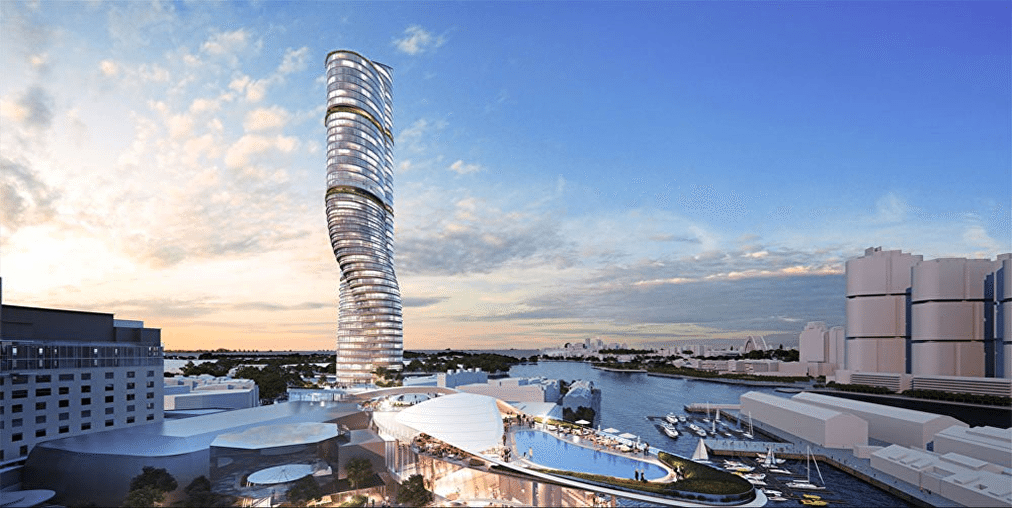 The Star Entertainment Group has announced the winner of the design competition for its proposed hotel and residential tower development at Pyrmont.

It won in a unanimous decision over designs from Grimshaw Architects and BVN, which is heavily involved in the planned redevelopment of Sydney’s Circular Quay.

“FJMT presented an elegant, international-standard design with a refined, distinctive and visually interesting built form… considered unique to its place as part of both The Star Entertainment complex and the broader Sydney environment,” the panel said.

“The design responds sympathetically to environmental considerations – for example, by maximising solar access for the surrounding area and by incorporating a facade and materials in keeping with the waterfront location.”

FJMT director Richard Francis-Jones said: “Our vision is for a beautifully sculpted architecture that will seem to grow from the great sandstone of Pyrmont.

“It will be a unique tower, shaped organically in relation to the local environment and character.

“The form and profile adjusts progressively to preserve sun access into public space, mitigate wind effects, and to share views and amenity with neighbours.”

The new hotel, which will become part of the Ritz-Carlton brand, is expected to house over 220 rooms, 150 residences and a wide variety of bars, casual eateries and fine dining options.

“The tower and the associated developments will see the return to Sydney of The Ritz-Carlton, our room inventory at The Star increase to around 1000, and more than 20 food and beverage venues across a broad range of price points added to existing offerings,” said Matt Bekier, Star Entertainment’s managing director.

The final design for the FJMT hotel tower won’t be submitted for official planning approval until midway through 2017 – around two years before the expiry of The Star’s exclusive casino operating rights in New South Wales.