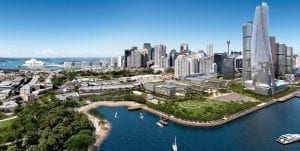 This morning Fairfax Media reported Packer’s Barangaroo South casino plans could be held up even further amidst concerns the development of Barangaroo Central next door could hinder the “iconic views” from the casino towers.

The government-run Barangaroo Delivery Authority has an agreement in place with Crown and its construction company, LendLease, that all parties must be informed “should there be any changes to Barangaroo Central that could affect sight lines to iconic views.”

Details about the proposed plans that could impact the views have not been released.

Construction of the Central Barangaroo site was delayed in 2015 after then premier Mike Baird announced a new tender process had been re-opened for the project following the approval of a Barangaroo metro station.

Approval of the new metro station meant the maximum above-ground gross floor area of development for Barangaroo Central was lifted from 120,000 square metres to 150,000 square meters. Notes from the planning and approval meetings show the potential impact the Central Barangaroo project could have on the views from Crown’s luxury casino and hotel tower.

In 2016, Crown was granted approval from the NSW Planning Assessment Commission for the development of a luxury 71 story, six-star integrated casino resort on the Barangaroo South site. The project has been met with criticism by members of the community who argue the space was previously reserved to be a public park and that the addition of a second major casino would contribute towards the states rise in problem gambling.

While the casino was originally scheduled for completion in 2020, in 2015 Packer’s group announced the project would be delayed for at least 18 months while developer LendLease submitted approval for the Central Barangaroo tender.

The Central Barangaroo project aims to turn the disused wharves on Sydney’s western waterfront into a thriving new urban precinct. Concept plans have been in the works since 2007, when the project was first approved by the NSW government. The 5.2 hectare site between Barangaroo Reserve and the financial and retail hub will be transformed to include three hectares of “unparalleled public space” along with new commercial and residential properties.

The winning tender to develop Central Barangaroo will not be announced until later this year. It is believed that Crown’s concerns about the views is holding the project up even further.

Crown Sydney is currently scheduled to open its doors in 2021. It will focus on VIP gaming and will not be licensed to operate slot machines. The casino aims to attract high rollers from China, with the views over Sydney Harbour expected to be one of the major drawcards.

Crown has been in hot water lately following the arrests of 18 employees in China, with Melco CEO Lawrence Ho saying Crown trying to break into the Chinese market was always going to be a “recipe for disaster.”