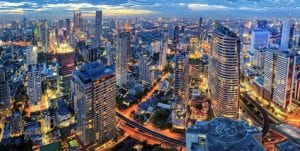 Analysts in Thailand are betting that casino gambling could become legalised in the country after the impending 2018 general elections. The legalisation of land based casinos could provide the country with a tourism boost while putting Thailand on the map as a destination for casino development.

The gambling industry in Thailand is heavily regulated, with all forms of gambling currently banned except for a state-run lottery and betting on horse racing within the Bangkok Turf Club. Thai’s are generally keen on gambling and an underground illegal gambling industry thrives.

Over the years, many Thai politicians have shown interest in the possibility of legalising casinos. A plan led by former prime minister Thaksin Shinawatra nearly saw approval for the country’s first casino in the resort-town of Pattaya in 2004, before he was overthrown by a military coup in 2006 and the plan was dispelled.

Since 2014, Thailand has been under the rule of a military junta, with the National Council for Peace and Order (NCPO) responsible for governing the nation. The 2018 election will see the country return to a democracy for the first time in four years, and analysts predict this will open the doors for the possibility of casino gambling being legalised in the country.

Visanu Vongsinsirikul, a specialist in the gaming industry and lecturer in economics at Bangkok’s Dhurakij Pandit University told VOA News, “After the election this issue will be raised again. When the election passes, it means the government has the rights of the [electorate], so the government will dare to make a decision about this. I’m quite sure that Thailand will have a legal casino… in the near future.”

According to Mr Vongsinsirikul, plans are already in place to introduce one major integrated casino resort to Bangkok and another in the beachside town of Phuket. He said research conducted in the past focused on three casino models that could be adapted to suit the Thai market, and several major players in the international casino industry have already shown great interest in developing in Thailand. In 2015, gaming giant Las Vegas Sands was in talks with the Thai government about opening a $6 billion 450 room resort and casino in Bangkok.

Since NCPO’s junta in 2014, casino proposals in Thailand have seen renewed interest, with many senior members of government and police officials now supporting the possibility of legalising casinos.

Thailand’s current Prime Minister Prayut Chan-o-cha is not in support of casinos and has previously said casinos will not be legalised while he is in charge, asking those in support to keep quiet as the country focuses on more pressing issues.

Despite Thailand’s strict anti-gambling laws, gambling is seen as a great form of entertainment for many Thai’s and underground gambling is rampant throughout the country. Around 10 underground casinos were closed down by the junta in 2014, with researchers at Rangist University predicting the illegal casinos were making more than $5 billion annually between them.

Many Thai nationals currently frequent the regional casinos located within easy reach across the border in Cambodia, Laos and Myanmar.

Based on the revenue generated by the illicit casinos, one industry expert estimates legalising casinos could generate $2.78 billion for Thailand’s economy in tax revenue alone. If legalised, Thailand could provide an alternative for big developers who are vying for a piece of Japan’s new integrated casino resort industry, or those who have been showing interest in setting up more land based casinos in the Philippines.