Oculus Rift headsets are set to be released in the first quarter of 2016, and while this could change the iGaming industry forever, we have a feeling it already has.

One of our favourite online casinos, Slots Million , has created the first virtual reality casino inspired by the device, so naturally we need to know all about the Rift and the potential impact it will have for online gaming.

What is Oculus Rift?

A virtual reality enthusiast, known by the name of Palmer Luckey, kickstarted the first notable crowdfunding campaign for a headset that provides a 3D immersive experience, known as the Oculus Rift. It began with Luckey pitching a prototype of the Rift in 2012 at a gaming convention. This then saw him team up with Brendan Iribe to create the company behind the Rift, based in Irvine, California.

The two created a Kickstarter campaign where they raised $2.4 million for the project. This funded Development Kits, specifically for product developers and both the first and second versions sold out.

In 2014, Facebook purchased the headset for $2 billion, with the CEO of the social media site, Mark Zuckerberg, stating that the headset will pave the way for the most social experience possible online. This hasn’t seen Facebook taking full control of the product, rather it is more of a support platform and work on Oculus Rift has remained at its original headquarters.

Oculus Rift is set to be released in the first quarter of 2016, as mentioned earlier, but has been purchased by product developers early so they can create apps for the device, including Slots Million who have created the first virtual reality casino to be compatible with the Rift.

A wearable headset that immerses you into a virtual reality seems so futuristic that it can be hard to imagine just how it works, but basically the Rift is a set of goggles that sees a screen with two displays, where the lenses would be, and an image allocated for each eye.

Lenses that are implemented above the screen focus and shape the image for both eyes in order to create a 3D immersive picture. The image is also adjusted accordingly to the person’s movements thanks to embedded sensors and an external positional-tracking accessory.

Overall, the Rift allows you to enter a virtual reality that offers a 3D world for you to explore, such Slots Million’s 3D virtual casino. If you don’t have access to Oculus Rift glasses, you can still get a taste of the experience by downloading the 3D casino software.

The final specs of the 2016 release of the Rift were released in mid-2015 and are as follows:

To be Rift ready, you are recommended to have the following system requirements on your computer:

We have frequently mentioned throughout the article the Slots Million Virtual Reality casino is compatible with Oculus Rift. Wearers can put on the device, enter the 3D online casino, and explore the virtual walls. You can also walk up to the slots as you would at land-based venues, activated by the headset’s positional tracking, and then play the titles such as NetEnt’s Starburst slot. 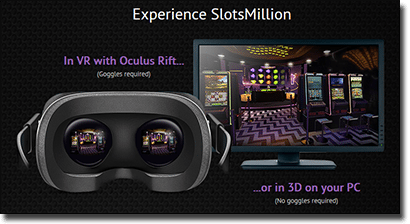 Basically, it offers a real money, immersive, virtual gaming experience for Oculus Rift users. You can view the PC/Mac demo by following our links to www.SlotsMillion.com and clicking on the Virtual Reality page.

But Slots Million aren’t the only ones to get on board with virtual reality gaming.

Prior to the release of Slots Million’s virtual casino, there was actually a company who took initiative and developed an app for the Oculus Rift, featuring a virtual casino.

Jeff Lande, the entrepreneur behind Lucky VR who has been in the iGaming industry for over a decade, designed Riftsino, a 360 degree view of a virtual casino that allows players to walk around and play an array of casino games, similar to Slots Million’s VR casino only this features table games too.

The difference between Riftsino and Slots Million VR casino is that the former is only offered in free play mode, while the latter allows you to play with real money.

Riftsino also offers a PC/Mac demo for consumers to check out while they are waiting for the 2016 release that you can watch below.

Virtual real money gaming definitely seems like a strong possibility for the future, but we have noted some disadvantages already.

Augmented reality: Unlike Google Glass, the Oculus Rift only allows you to see a 3D virtual world, so the real world is not mimicked rather an animated version is. This means while you are getting an immersive experience, it won’t feel 100% real.

Motion sickness: We have also heard that wearing the headset can cause motion sickness, something that is not wanted when focusing on gameplay, though this is just speculation and could depend on the wearer.

Legislation: We are unable to tell if legislation will prevent real money gaming apps for Oculus Rift, but just as online casinos have created mobile versions of their sites we can see them creating VR casinos for the Rift, just as Slots Million have so this shouldn’t be a problem.

Overall, VR real money gaming is an exciting possibility for the future and we’d put money on the Oculus Rift’s release definitely kicking things off.