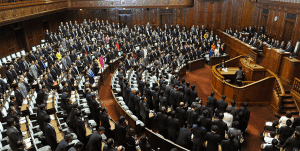 LAWMAKERS in Japan are considering a proposal that would restrict gamblers to 10 casino visits per month.

Plans unveiled on Thursday also called for the tracking of residents’ gaming activity via government-issued My Number ID cards.

The anti-addiction measure have already met with opposition on both sides of the casino gambling debate.

Prime Minister Shinzo Abe and his LDP party consider the proposed restrictions too severe, while elements of their coalition partner, Komeito, remain against legalisation altogether.

The restrictions will not apply to tourists.

Of particular concern to ruling lawmakers is the proposal to track entrances via My Number cards, which are only held by around 10 per cent of the population.

The LDP has also made issue of plans to restrict the size of casinos to 15,000 square metres, with some suggesting that would make it difficult for operators to record profits.

If approved, the new measures will be added to a comprehensive gambling bill that is scheduled for submission to the Diet by the end of March.