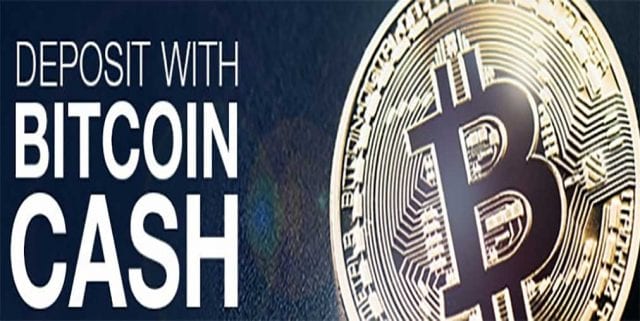 Online gambling companies are constantly looking at new payment options, and it appears Bovada is leading the way with the addition of Bitcoin Cash, or BCH.

The cryptocurrency, which is a fork of bitcoin and generated by a software split, has recently been added to the online gambling site as a deposit option.

Due to the increase in value of BCH and the lower transaction fees involved, the addition makes it appealing to players at this US-only online casino site.

While BCH has its positives due to its large block size including quick transaction times, it’s only available to Bovada players between Monday to Friday 9:00 am to 4:30 pm EST, and you will need to call the online casino to make your deposit.

Additionally, the online casino only offered a welcome bonus using BCH in October when it first launched, and this bonus offer is no longer available. However, players can still claim a $5000 welcome bonus when signing up and using bitcoin to make their first deposit.

The online gambling site, which offers slots, table games and more to American punters, was quick to add bitcoin as an available deposit and withdrawal method when it first became popular.

The choice to add the payment method to its small number of online casino deposit options proves that BCH is becoming just as popular as bitcoin, despite only being developed in August. However, the addition is mutually beneficial as it will boost BCH’s public profile.

When the bitcoin network split, bitcoin owners doubled the amount of coins that they owned. Although one bitcoin is worth more than one bitcoin cash, due to its characteristics, this could change.

The choice to add BCH to the online casino payment methods follows the sudden decision by a group looking to change the way bitcoin works.

The group of businesses and miners, looking to develop two new coins, announced they would be suspending plans for a hard fork, known as Segwit2x. If it had gone ahead, the software split would have changed the rules of the cryptocurrency by increasing bitcoin’s block size. The group revealed a lack of support from the bitcoin community as the reason behind its decision to cancel the Segwit2x hard fork.

While the value of BCH has surged, recording a high of $USD800 last week and reaching a record $2500 on Sunday, the price of Bitcoin Core, or BTC, has dropped. However, BTC maintains its position as the top cryptocurrency on the market and experts have revealed that the fluctuations of both cryptocurrencies are likely a result of Segwit2x being called off.

The bitcoin community is adamant that BCH is the only fork of bitcoin which operates in the same way as the original version that Satoshi Nakamoto released, and supporters of the currency believe the demand will continue to grow.

The best part is we will likely see it at more and more online casinos. If you have bitcoin cash, you can deposit at Bovada online casino during the designated hours and play your favourite online casino games. Can’t wait? Try bitcoin or other online payment methods as listed in our Bovada review.