Click or tap to your nearest Microgaming casino now as two of the best progressives have both gone over the $9 million mark.

Mega Moolah and The Dark Knight have almost hit eight digits in Aussie dollars, and you could be next to win either (or incredulously both) jackpots and become the next millionaire.

At the time of writing, Mega Moolah is set at $AUD9,644,481.99, while the Dark Knight is set at $AUD9,643,760.73 with both jackpots set in Euros or Pounds. Unfortunately, this doesn’t mean you will be paid the equivalent in AUD as the bet size would not equate correctly or fairly to those playing in GBP or Euros.

You can find both of these progressives at our recommended online casinos – each encrypted with technology on par with financial institution standards to secure your real money wagers – and these include:

You can find Mega Moolah for smartphones and tablets at all of these mobile online casinos too – The Dark Knight hasn’t been optimised for the mobile platform yet however.

How to play Mega Moolah 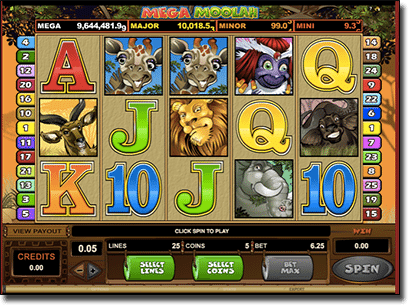 Mega Moolah is similar to a standard 5 reel 25 paylines video pokie, but it has three progressive jackpots attached – we want to win the Mega, not the Major, Minor or Mini.

There is an African Safari theme, featuring lions, monkeys, giraffes and more, as well as 15 free spins available to trigger by spinning at lest three Scatters (the monkey).

You need to activate the bonus round in order to win the progressives however, which is triggered at random provided you are playing the maximum bet of $6.25 per spin. Once it activates a Wheel will appear and you will spin this to either win one of the jackpots or a cash prize.

How to play The Dark Knight 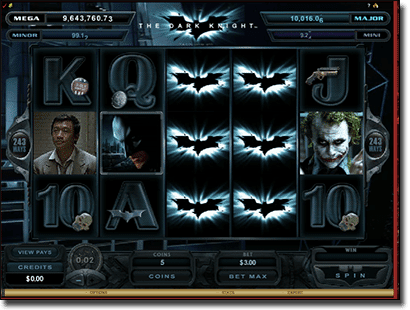 Based on the popular film franchise Batman, The Dark Knight is a cinematic pokie featuring our favourite villain, the Joker (played by the late Heath Ledger in the movie) and four progressive jackpots similar to Mega Moolah.

There’s no set bet required to trigger the progressives, so you can play the minimum bet of $0.30 per spin and a Wheel, similar to Mega Moolah’s Wheel, will appear and spin – hopefully landing on one of the jackpots.

The pokie also has a 243 ways to win format and there’s 15 free spins up for grabs here too.