32Red.com is offering a series of sensational casino bonuses, cash giveaways and luxury prize draws over the next month in honour of the 2016 European Championships.

Australian punters can win a share of $150,000 real money on freeroll pokies tournaments throughout the Euros, which kicked off last Friday in France and will run until July 11 (AEST).

There are also stacks of free spins to be won on Microgaming’s best soccer pokies, as well as a $10,000 European holiday and tickets to the final in Paris.

Play selected pokies at 32Red over the next few weeks for a chance to win a dream trip to France for the final of the 2016 Euros.

To enter the Football Fever promotion, all you have to do is log in or sign up at 32Red.com and play the Football Star and Shoot! real money pokies.

Every $50 you bet on those two games between now and June 27 will earn you a ticket into the grand prize draw, which will take place on Tuesday, June 28.

The lucky winner and a friend of their choosing will score tickets for the Euro 2016 decider at Stade de France, with two nights’ accommodation and $500 cash for travel expenses included.

Match of the Day deposit bonus

To claim your Match of the Day deposit bonus, all you have to do is:

Rack up Red Ruby rewards on real money casino games throughout the Euros for a chance to win a luxury holiday package and thousands of bucks in bonus cash.

Once you select your favourite team and opt in, every 100 loyalty points you earn will contribute one ‘shot’ to your leaderboard score.

The more shots you get away, the higher up the rankings you will go.

If you play for real cash at 32Red on any day your team scores at the Euros, you’ll win 10 free games on Bar Bar Black Sheep, Bikini Party, Dragon Dance, or Wild Orient pokies. 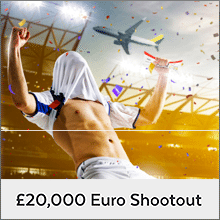 The player who finishes top of the ladder at the end of the tourney will snag the grand prize:

(*Depends on the destination)

While Europe’s top football nations strive for glory in France, Aussie punters can play for a share of $50,000 cash prizes across five special pokies tournaments.

The leading contestants from each stage will progress through the Second Round, the Quarter Final and the Semi Final until only 100 remain for Football Frenzy Freeroll #5 – The Final.

Football Frenzy Freeroll #1 is already underway and costs nothing to enter, so log in at 32Red Casino now to get started.

32Red is giving away free spins on popular pokies games for every red card shown at France 2016.

If you make a deposit and play at the casino on any matchday when a player is sent off, you can claim 32 free games on popular titles such as Bar Bar Black Sheep, Bikini Party, Dragon Dance and Wild Orient.

Punters can grab even more free spins daily with the 3-2 Score – Free Games Galore promotion, which applies to any day where a Euro 2016 match ends in a 3-2 scoreline after 90 minutes.

Both the Free Games Galore and Red Card Giveaway bonus spins are valid until the following day and can be played via the desktop download suite, the instant play site, or the 32Red mobile casino.

From now until the end of the Euros, Australian pokies players can compete for a $100,000 prize pool in 32Red’s $100k Shootout.

Everyone who finishes in the top 16 will take home at least $1000 cash, with the overall winner snaring a guaranteed $10,000.

Eliminated players can reenter the tourney by matching the initial buy-in fee, which is only $10.