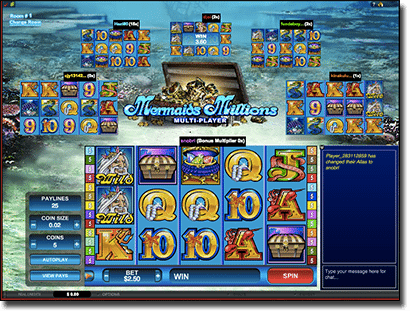 The Mermaids Millions multiplayer pokie has been officially rolled out, and Royal Vegas Casino are celebrating by offering players a share of $5000 in cash.

Royal Vegas Casino are offering players the chance to win $50 to celebrate the release and all players have to do is head to www.RoyalVegasCasino.com and wager $10 on Mermaids Millions multiplayer pokie to earn a ticket into the draw.

The more you wager, in $10 increments, the more tickets you will earn and the more chances you will have of winning.

On January 28, 25 lucky players will be drawn and $50 will be credited to their account – with three draws already taking place in previous weeks seeing a share of $3375 already paid out.

Join Royal Vegas Casino now if you aren’t a member yet to try the new multiplayer pokie by Microgaming and score yourself $50 in the process.

Now Microgaming have taken one of their most popular pokies Mermaids Millions and created a multiplayer format, available at Royal Vegas via a downloadable platform or your browser (Safari, Chrome, Internet Explorer, etc.).

The pokie is quite similar to the original, except you will be playing with up to five other players and you can talk via the chat box included. Additionally, any player spinning the reels can activate the Treasure Bonus.

To trigger the Treasure Bonus on the 5 reel and 25 paylines pokies, you need to collect Bonus Multipliers. Collect these by scoring at least two Scatters and two gold coins in the one spin.

The more you collect the more you will win in the Treasure Bonus, where you can win up to 510,000 coins. In the base game you can win even more – up to one million coins.

You can only play Mermaids Millions Multiplayer in real money mode so be sure to sign up via our links and make a quick deposit to try out the new pokie format from Microgaming.

If multiplayer isn’t your style Microgaming will be releasing two brand new pokies, Dragon Dance and Bikini party, next month and they will be available to play at RoyalVegasCasino.com – just keep an eye out here for more information on their release.
Share On Facebook Share On Twitter