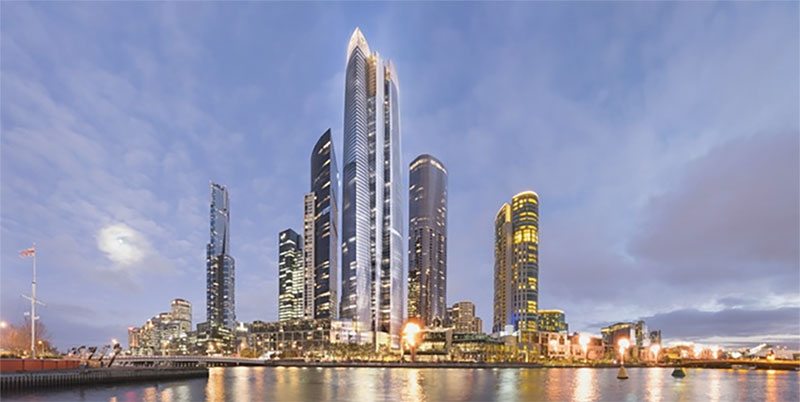 As Crown Melbourne looks to further expand its already hefty footprint on Southbank, Victoria’s gaming regulator has copped a stern rebuke for failing to properly supervise the casino’s activities.

It was announced on Thursday that Crown had won planning approval for the Queensbridge Hotel Tower – an extravagant 90-storey complex that will eclipse the Eureka Tower to become the tallest building in Australia.

Premier Daniel Andrews said the $1.75 billion development would be a landmark addition to the city’s skyline, and not purely because of its impressive stature.

“It’s not just about height though, the quality of this design outcome, particularly the public realm benefits that will be accessible for all Victorians, really mark this out as a very, very special project,” he said.

While Mr Andrews insisted the project was planned in a “careful” and “considered” manner, not everyone is pleased with the announcement.

Some have questioned why the state’s planning minister, Richard Wynne, would approve a project that appears to contravene the skyline height restrictions he introduced only last year.

The sense that Crown is allowed to play its own rules is one shared by Victoria’s auditor-general.

In a report released on Wednesday, Andrew Greaves’ office chastised the Victorian Commission for Gaming and Liquor Regulation over inconsistencies in its supervision of gambling and business activities at the Southbank casino complex.

“Its current approach is not adequately risk-based or purposeful and… many important activities have been undertaken only sporadically,” said the report.

Crown Melbourne holds 13 liquor licenses and is the only business in Victoria that runs real-time gambling operations 24 hours a day, seven days a week.

The AG report said the VCGLR’s obsession with meeting inspection quotas meant potential problem areas – with particular regard to alcohol licensing – were not receiving the attention required.

“VCGLR has not adequately monitored compliance with gambling and liquor legislation,” it read.

“Compliance activities are not sufficiently risk based because VCGLR has focused on meeting a target number of inspections, rather than directing inspections to where noncompliance has a high risk or high potential for harm.

“This approach to compliance does not support the legislative objectives for harm minimisation.”

Proper regulation of Crown’s casino activities have also gone by the wayside, due largely to the VCGLR’s policy of rotating staff through various roles rather than employing a dedicated team of casino inspectors.

“Instead, VCGLR rotates all compliance inspector teams through the casino, but it has not supported them with adequate training, guidance and consistent management oversight.”

The VCGLR is already in the process of creating a specialised casino inspection unit, and the auditor-general has urged the regulatory body to put those plans into action sooner rather than later.