Already a favourite at land-based casinos the world over, Ultimate Texas Hold’em is now poised to become a top drawer at live dealer casinos online. Find out everything you need to know about rules, payouts, strategy and side bets, as well as where to enjoy the best casino poker games on the web.

Ultimate Texas Hold’em is now available at most top real money casinos powered by Evolution Gaming – one of Europe’s very best live dealer providers. That includes several of our most trusted online gambling sites, all of which offer superior customer service, secure banking options, and certified SSL data encryptions to keep your money and personal info safe. Follow the links below to experience first-class internet gaming and check out the range of exclusive bonuses and promotions available to online players. 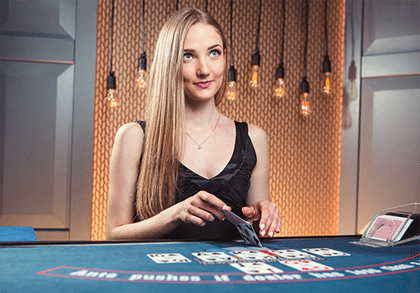 For the most authentic online gambling experience, do yourself a favour and check out Evolution Gaming’s Live Ultimate Texas Hold’em tables for PC, Mac and mobile. Everything is played in real time with a standard 52-card deck and a professional, real-life dealer, while first-class HD video streams and various camera options mean you won’t miss a lick of the action. This is also one of the most accessible live casino games going around, as a $0.50/$500 bet limit caters to newbies, seasoned VIPs and everyone in between.

How to play Ultimate Texas Hold’em

Ultimate Texas Hold’em transforms the world’s most popular live poker game into a player-versus-dealer format similar to casino hold’em, three card poker and Caribbean stud. It shares many rules with standard Texas hold’em poker, including hand rankings, the standard 52-card deck and the basic elements of dealing and betting, but with a few twists designed to offer players plenty of incentive while keeping the action fast and simple.

A hand of Ultimate Texas Hold’em begins with the player making two compulsory bets of equal size: an Ante and a Blind. There is also a side bet called Trips, but this is optional (and, as we will explain later, not recommended). 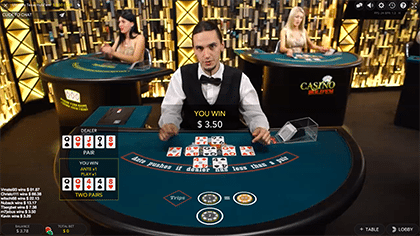 The important thing to note about the Play bet in Ultimate Texas Hold’em is that a player can and must raise only once per hand. So if we were to play the large raise (3x or 4x) before the flop, for instance, we could not then play the medium raise (2x) after the flop or the small raise (1x) after the turn and river. Also, if a player checks at both the pre-flop and post-flop betting rounds, he or she must make the Play bet in the final round or else fold out of the hand.

Once the five community cards are turned up and the player’s final decisions are made, both the dealer and the player reveal their hands. Just like in standard hold’em poker, the winner is whomever has the strong five-card poker hand using any combination of the two pocket cards and five community cards. A player can win with any hand, but the house needs at least a pair to ‘open’.

These are the possible outcomes for all bets:

All winning Ante bets and Play bets pay even money (1 to 1). Thus, if we made a $5 Ante bet, took the big raise (four times the Ante) and won after the dealer opened, we would collect $50 from the Ante and Play wagers ($25 total stake + $25 winnings).

The Blind bet, however, comes with a list of bonus payouts and only wins when the player has at least a straight. So even if we were to win with a three of a kind after the dealer opened, for example, the Blind bet would push because our hand wasn’t a straight or better.

The standard Blind bet pay chart for UTH reads like so:

When making the Ante and Blind bets at the beginning of a hand, punters may also opt for the Trips side wager. This bet is completely independent of all others and pays according to only the poker value of the player’s hand, regardless of whether or not it beats the dealer.

The Trips bet is so called because a player needs at least a three of a kind to win. Payouts vary from game to game and from casino to casino, but the standard Trips payout chart looks like this:

That pay chart combined with perfect strategy produces a house edge of about 3.50 per cent – a significant dent in the expected returns when no side bet is played.

In raw terms, the house edge of Ultimate Texas Hold’em poker is just under 2.19 per cent. Thus, with optimal strategy, you can expect to lose about $2.19 out of every $100 you wager on the Ante bet over the course of a session.

However, that figure doesn’t offer a true representation of the game’s expected returns and overall value for money. Players using perfect Ultimate Texas Hold’em strategy will end up betting over four times the Ante wager on average, taking into account the Blind and the Play bets. As such, punters can expect to win more than if they played only a straight Ante bet each hand.

According to calculations run by leading industry experts, the actual ‘element of risk’ in UTH poker is 0.53 per cent. That makes it one of the best-value casino games at any land-based venue, and a close competitor with the best blackjack, craps and video poker games at online casinos.

For the time being, the perfect strategy for Ultimate Texas Hold’em is purely theoretical; nobody has yet managed to express it as a practical method of play. There are, however, a number of basic strategies around that are both effective and easy to follow while keeping the element of risk well below 0.60 per cent.

For example, below is Michael Shackleford’s simple strategy for pre-flop betting according to the value of your pocket hand. When taking the big raise, always play the maximum of four times the Ante bet – never go for the three-times option.

Given its popularity worldwide, it is a little surprising there aren’t more genuine Ultimate Texas Hold’em games available at real money internet casinos. Evolution Gaming’s superb Live Ultimate Texas Holdem tables are among the very few online versions that offer standard rules and payouts. There are, however, a number of virtual casino poker games that offer similar gameplay with different betting rules and payouts. 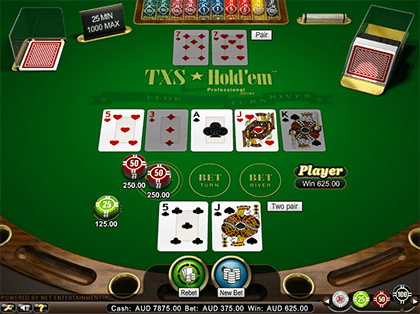 NetEnt TXS Holdem Pro – Part of Net Entertainment’s esteemed Professional Series casino games, TXS Holdem offers the same core elements of UTH poker but with a simplified betting scheme. Play starts with an Ante bet, after which you must either call at double the Ante or fold before the flop, bet or check after the flop, and then bet or check again after the turn. NetEnt quotes the theoretical return as a very healthy 99.37 per cent.

Texas Hold’em Bonus – Offered by a number of reputable online casino software providers, Texas Holdem Bonus plays much NetEnt’s TXS Holdem Pro Series games. With proper strategy and standard Vegas rules, the element of risk is only 0.53 per cent – about the same as Ultimate Texas Holdem. Avoid the optional bonus bet, however, as that pumps the house edge up to over 8.50 per cent.

Microgaming Triple Pocket Hold’em – Found at many of the best Microgaming casinos, this quirky variant of real money Texas holdem poker gives players not one, not two, but three chances at a strong starting hand. The catch: the house always ends up with two hands against the punter’s one. Even though the dealer gets the bum hands discarded by the player, the advantage is firmly with the casino in this one.