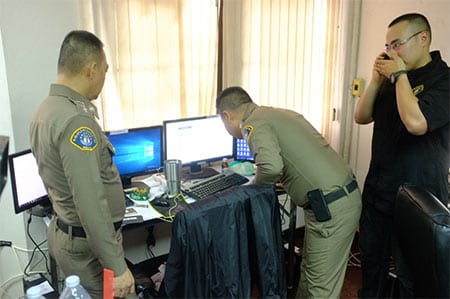 A Bang Phlat house alleged to be the headquarters of online gambling site 818Kiss was on Monday swooped and searched by the Crime Suppression Division of the Bangkok police force.

The third floor also had electrical wiring deployed at all the windows to avoid intruders.

A search in the second-floor rooms turned up eight staff members and 10 computers.

The police also seized bank books and a notebook containing income and expenditure.

After going through the computers, it was discovered that staff and gamblers communicated through a computer application.

Police acted on a tip off about suspected illegal activities in the said house, where the perpetrators were operating football betting, card games and baccarat.

The 818Kiss website is said to have thousands of clients and monthly earnings amounting to millions of Thai baht.

The owner of the Bang Phlat property is unknown.