The first pokie tournament featuring the Terminator 2 slot on a multiplayer platform has kicked off today and you will find it at Microgaming casinos as the T-100,000 tournament. 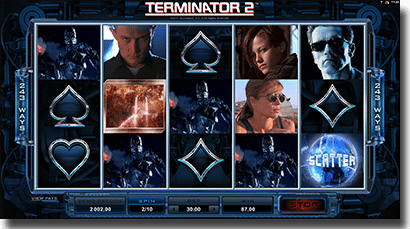 Terminator 2 was recently released as a multiplayer game for the Microgaming Multi-Player and Tournament Network. From July 1 up until August 3, players can compete for €100,000 ($AU145,000 approximately) in the T-100,000 tournament.

Along with the very popular slot, Sure Win and Centre Court have both been released on a multiplayer tournament platform, with the tournament featuring the Sure Win slot kicking off on July 6, until August 2 with a €10,000 (approximately $AU14,500) jackpot on offer.

The Product Manager of Microgaming’s Multiplayer Games, James Ford, said in a Microgaming press release that the roll out of these slots on the multiplayer platform is just the beginning.

“Having invested in the tournament administration, configuration and reporting modules earlier in the year, we are now in a fantastic position to roll out some exciting new multiplayer titles, along with headline network tournaments,” he said.

“The release of Centre Court and Terminator 2 on our Multiplayer platform is just the start of things to come.”

What are slot tournaments?

For players who aren’t familiar with slot tournaments they are located in the games lobby, and start off with buy-ins, which are basically entry fees, such as the $AU14.50 entry fee for the Terminator 2 tournament, though some tournaments can be free.

Once players have paid, the tournament begins with each player receiving credits to commence the tournament with. For example, the Terminator 2 buy-in sees players receiving 18,000 coins. Players also receive a certain amount of time to play and for Terminator 2, it’s 10 minutes. Players can continue to play, however, by purchasing a ‘ReBuy’ or a ‘Continue Play’.

Once the tournament is over your score will be compared with every other tournament player and winners will be paid accordingly.

Where can I play Microgaming slot tournaments?

Our recommended Microgaming web casinos are all offering the aforementioned tournaments at both their instant play and downloadable casinos.

Simply sign up for one of these top leading casinos, download or access the instant play version, log in, make a deposit, and then head to the games lobby where you will find the ‘Tournaments’ category.