New for 2016 from Thunderkick, the Zoom online slot game combines classic slot stylings with an innovative six-reel layout packed full of funky features. Online slot players can check it out now on desktop, laptop and mobile at our top-ranked instant play casino sites.

Where to play Zoom slots online

The first thing you will notice about Zoom is that it features not three, not five, but six video reels. This quirky layout creates more winning opportunities than your average slot machine, with 64 fixed paylines and 24 active symbols on each spin.

The Zoom real money slot game comes with a traditional symbol set of the sort you would find on a pub fruit machine, with cherries, grapes, lemons and watermelons alongside liberty bells, sevens and stars. There is also a high-paying wild feature that can substitute for any of the aforementioned symbols. 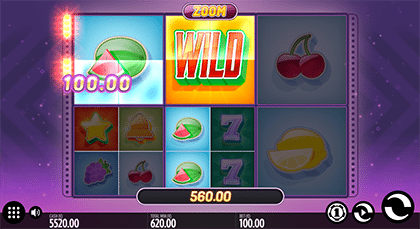 The six-reel slot layout is divided into six 2×2 squares containing four symbols each. Whenever the scatter feature lands in one of these ‘Zoom areas’, as Thunderkick calls them, it triggers a free respin while expanding to create a Massive Symbol that covers all four spots in that area. This expansion trick also applies to wilds, which can lead to huge multi-line payouts.

Then there are Super Massive Symbols, which only occur when the Zoom scatter appears in each of four adjacent 2×2 areas (i.e. a big square made of four smaller squares). Whereas a standard Massive Symbol covers four spaces, the Super Massive feature fills a whopping 4×4 grid to cover 16 spots. As that effectively puts the same symbol in four consecutive spaces on every row, it all but guarantees a big win on the respin – especially if it appears on reels one, two, three and four.

What’s remarkable about Zoom is that it pushes boundaries while simultaneously paying homage to the vintage slot games we know and love. Those who are partial to a classic three-reel slot will feel right at home among the old-school fruity symbols, while players who like innovation and fresh features will enjoy the quirky six-reel setup and the respins with expanding scatters and wilds.

Some would say the game is missing a second-screen bonus or a free spins round, but others would argue that’s part of the quasi-retro charm. Besides, there isn’t much difference between standard scatter-triggered bonus spins and Zoom’s Massive Symbol respins – you get something for nothing either way.

The real purists might take issue with a fixed betting layout in which you can neither select your preferred paylines nor choose how many coins to bet per line, both of which were once standard options on video slot games. This type of wagering interface is fast becoming the norm, however, so it would be a bit rich to detract points for that.