Loaded with immersive storylines, stunning animations and some incredible bonus features, Warlords: Crystals of Power might just be Net Entertainment’s biggest and best slots release of 2016. Read on to find out how you can win big on this all-action video slot, or head to one of our top-ranked NetEnt casinos below to sign up and start spinning.

Where to play Warlords: Crystals of Power slot online

About Warlords: Crystals of Power

Launched at the end of November 2016, the Warlords: Crystals of Power slot tells the tale of a world in which warring rulers have laid waste to the land in an age-long battle for untold riches and ultimate glory. Now only three lords remain: Luter Grimsson, the barbarian chief; Miyamoto Musashi, the samurai warrior; and Juanita, the jungle priestess. All are hell bent on finishing the job.

“An incredible amount of effort has gone into the creation of the game and the storytelling of Warlords: Crystals of Power,” said Simon Hammon, NetEnt’s head of production.

“We are thrilled with the 3D graphics, soundtrack and gameplay, the result is simply stunning.

“Players will be blown away by the attention to detail, especially the animations and interactivity of the characters.”

Like the vast majority of NetEnt real money slots, Warlords has five video reels with three rows of symbols. There are 30 fixed paylines and 10 bet levels. Coin sizes range from 0.01 to 1.00, so the minimum bet is $0.30 and the the max bet is $150 – good news for the high rollers out there.

The Crystals of Power slot features nine standard symbols, all of which are related to the three warlord characters. The portraits cover three rows each and pay the most, the animal familiars fall in the middle and the signature headwear symbols pay the least. There is also a wild feature that can substitute for each of these icons to make or improve a win line.

Below are the coin payouts for each symbol type, ranked from highest to lowest and from most symbols in a combination (five) to least (three): 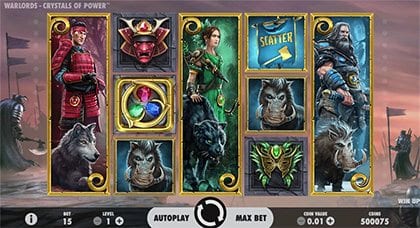 Along with the standard Warlords wild symbol, there is an overlay feature that can be triggered during any spin in the main game. When activated, a new set of reels appears in front of the regular layout and one of three special events takes place:

Priestess Arrow – With her bow in hand and a quiver on her shoulder, Juanita sticks between two and five wilds anywhere on the reels.

This is where the fun really starts. There are three different Warlords: Crystals of Power scatter features, each corresponding to one of the main characters. They can award any number of different bonuses depending on how many symbols appear, whether they are all the same colour and sometimes what position they fall in.

A trio of scatters in any single colour unlocks one of three character-based bonus rounds: 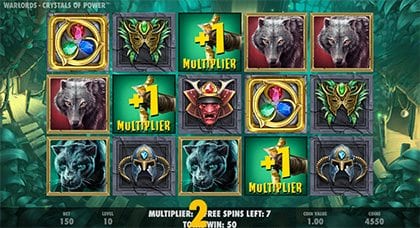 If there are two or three scatters on the reels and each is a different colour, a battle will ensue to determine which will transform so all are the same type. The likelihood of any particular scatter winning out comes down to the mathematical nature of the battle.

There are three possible scenarios:

Only after all scatters are the same colour can the respins feature come into play.

The battle scene is only necessary when there are different types of scatter symbols on the reels. If there are two or more scatters and all are the same type, the respins commence straight away. 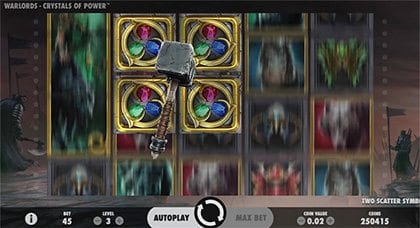 Much like the overlay wilds feature, this part of the game uses a shadow layout with a specific set of symbols in play. Existing scatters stay fixed in place while the remaining reels start spinning again. There are no additional line wins of offer here, but a much greater reward awaits anyone who strikes a third scatter to activate free spins.

Even if you don’t complete the hat-trick in repins, there is still one last opportunity to open the bonus game.

Should a third scatter appear in respins, the free spins begin immediately. If not, the Final Chance feature awards one of two prizes: a third scatter symbol, thus awarding free spins; or an instant coin win of between three and 100 times the original bet. Either way, you come out a winner. 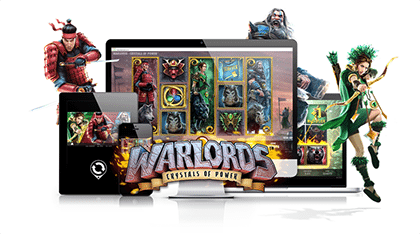 The Warlords: Crystals of Power slot is tailor made for instant-play on Apple Safari, Google Chrome, Mozilla Firefox, Microsoft Edge and most other Flash-enabled internet browsers. That makes it compatible with both Windows PC and Mac OS, not to mention all sorts of smartphone and tablet devices.

Each one of our approved real money casino sites recommended in the table above runs dedicated desktop and mobile gambling sites that require no downloads or software setup whatsoever. Tap the links in this table to sign up and explore hundreds of top NetEnt slot games like Warlords, all while enjoying some the best casino bonuses and weekly promotions on the World Wide Web.

It’s hard to go past the NetEnt Rocks slot series, especially after the Guns N’ Roses video slot was named Game of the Year at the 2016 EGR Operator Awards. But we think the Warlords online slot might be even better.

Then there are the features. As soon as you land two or more scatters, no matter what colour or whether they match up, you are in for a treat. The free spins throw up enormous wins, but even the coin prize consolation is very rewarding – especially if you are an online VIP player betting at $150 a pop.