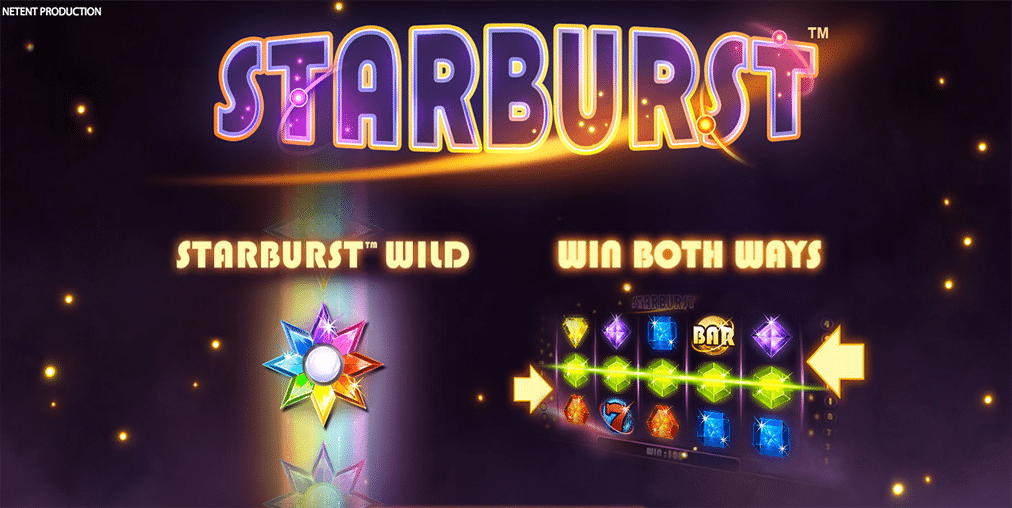 Starburst is one of Net Entertainment’s most popular online slots, and for very good reason. This review will cover all the ins-and-outs and explain why so many of the best online casinos highlight this innovative video slot as one of their featured games.

Where to play Starburst slot online

The Starburst slot game features a straightforward five-reel layout with three rows of symbols and 10 fixed paylines. There are 10 bet levels and as many as seven coin options, ranging from 0.01 to 1.00, for a minimum bet of $0.10 and a max bet of $100.

The game is comprised of seven paying symbols, mixing classic bars and sevens with the bright-shining jewels that give Starburst its distinct appearance and feel. There is also a wild feature that can substitute for any other symbol in order to create or improve paying combinations.

These are the coin returns for each paying symbol type, ranked from most valuable to least and from highest (five of a kind) to lowest (three of a kind):

Most five-reel slot games only pay in one direction: from left to right. That means a combination of three or more consecutive symbols only wins when it starts on the first reel (left of screen).

But Starburst isn’t like most slot games. Along with standard left-to-right payouts, it also offers wins in reverse – i.e. symbol patterns also pay when they start on the fifth reel (right of screen) and connect on consecutive reels moving back to the left.

For example, take a look at this screenshot: 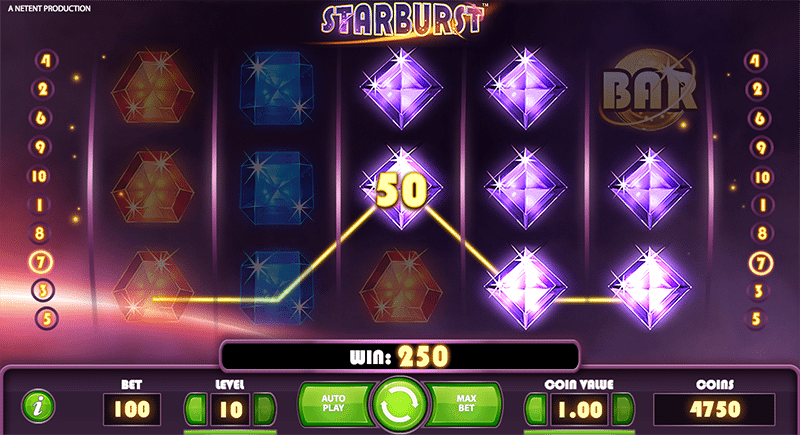 Notice how the winning purple gems connect from right to left, starting on the last reel? Besides offering more winning opportunities than a regular video slot base game, this payout system also keeps you interested up until the final column stops spinning – because you can still win even when there are no patterns on the first three reels.

Wild features are cool enough in their purest form, creating winners out of thin air and turning average three-part combos into fours and fives of a kind. But the Starburst wild symbol has a little something extra up its sleeve.

Whenever a wild appears on reels two, three, or four, it will expand to cover every single position in that column. Better still, it also triggers a free respin with the chance to land more expanding wilds and activate up to two additional respins.

This is often a very rewarding slot feature. Not only do you get increased winning opportunities with a wild covering a whole reel, but also a free go to strike even more riches. Maxing out the respins feature and filling every spot on the middle three reels with wilds guarantees multiple line wins from both directions.

The Starburst slot is available for instant browser play at all leading NetEnt casinos, including several of RMC’s most trusted slot sites:

Each of these licensed online casinos caters to players with a multitude of secure banking options for real money deposits and withdrawals, including Visa, MasterCard, Neteller, Skrill, Paysafecard, Flexepin, Entropay and direct bank transfers. Several of these safe casino sites also run regular Starburst free spins promotions, so follow the links and sign up to check out the exclusive slot bonuses available to RealMoneyCasinoSite.com readers.

Starburst is but one among hundreds of NetEnt Touch mobile slots games available for real cash betting and free demo play on smartphone and tablet devices. You find will it at each of our featured online gambling sites, all of which run dedicated mobile casinos that offer dozens – even hundreds – of slot games for instant play with no downloads required. 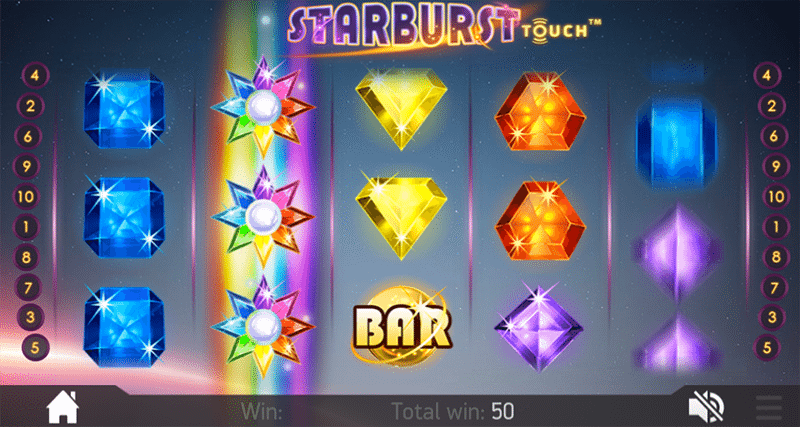 These state-of-the-art mobile gaming interfaces are optimised for Chrome, Safari and most popular mobile browsers, so you don’t have to install any apps and can access all games regardless of whether you have an iPhone, iPad, Android, BlackBerry, or Windows Phone device.

Starburst rating and review – our verdict

What we like about Starburst is its unique blend of simplicity and innovation. There aren’t many features – no scatters, multipliers, or bonus games to speak of – but the special elements in play pack quite a punch. The both ways payout scheme should be much more common than it is, especially on games like this that lack in bonuses, while the Starburst wild respins can produce some huge wins.
We rate it 4/5.