Basketball, cricket, football, women’s beach volleyball – whatever your favourite sport is, there is probably a real money slot game for it. We have combed through the web and found what we think are the very best sports slot titles, all of which can be enjoyed with real money at RMC’s top-ranked online casinos.

Released just in time for Euro 2016, the Football: Champions Cup slot game by Net Entertainment is the most advanced and featured-packed soccer slot on the World Wide Web. 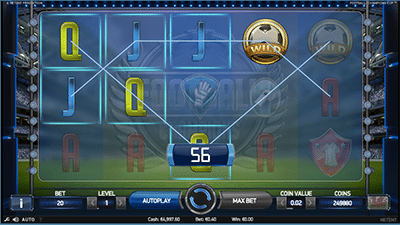 The game has five reels and 20 paylines laid over a packed-out stadium cheering on every win. Start by picking your favourite European national team, then set your bet level and hit the spin button to kick off.

The best thing about this slot is the dual bonus rounds. Three bonus symbols trigger a pick-and-click penalty shootout where you must beat the keeper for instant wins and then stop the shooter for even bigger prizes, while a hat-trick of scatters unlocks a free spins knockout round in which you must land more wilds in your opponent’s goal to progress to the next round.

Hole In Won & The Back Nine

The best online casinos carry a surprising number of options for golf enthusiasts, the best of which is the Hole In Won slot by Rival Gaming. 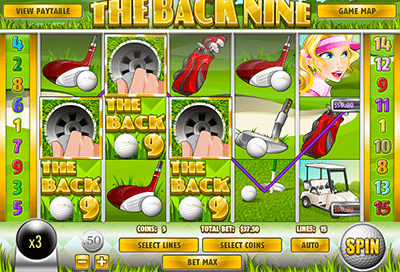 Both the original and the sequel, Hole In Won: The Back Nine, are standard five-reel video slots with 15 selectable paylines and coin options ranging from 0.01 to 1.00 for a $75 max bet. They also come with expanding wilds that fill up all three positions on a reel whenever they form or extend a winning combination.

But the highlight of both titles is the interactive bonus round, which starts whenever you score three or more scatter symbols on the same spin. Play your way through the nine-hole mini golf course and earn top payouts for every hole in one you hit, with increased returns when you trigger the bonus with four or five scatters.

There are hundreds of internet slot games that try to be sexy, but not many – if any – combine eye candy and genuine innovation the way Microgaming’s Bikini Party slot does. 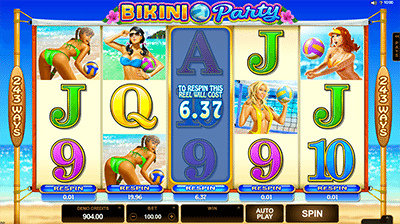 The first things you will notice are the character symbols, all of which feature bikini-clad female volleyballers in various tantalising poses. But the real beauty of this game lies beneath the attractive exterior.

The respin feature is a clever quirk that gives you the option have a do-over on any single reel, but for a price. The more value you might get out of the respin, the more you have to pay. There is also a scatter bonus with 15 free spins and a treble multiplier, while the 243 ways layout throws up regular payouts to keep you interested.

There are only a handful of real money slots based on the sport, but Playtech’s Tennis Stars pokie is an ’80s-inspired retro gem with plenty to offer all punters. 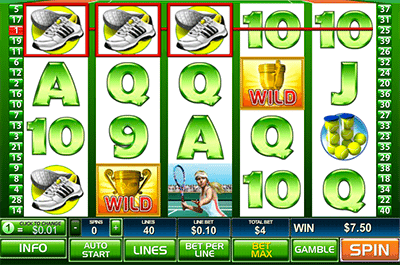 First of all, this is a must-try for high rollers. While the specific betting options may vary from casino to casino, the version we tested featured a $5 coin option with which it was possible to bet up to $50 per line. With 40 all bet lines in play, that makes for an incredible $2000 max bet – music to the ears of any true VIP slots player.

If that kind of action is a bit rich for your blood, you can still cover every line for as little as $0.40 per spin. Just because you’re betting less doesn’t mean you miss out on any major features, of which Tennis Stars has two: a scatter-triggered Championship Bonus game where you must beat the computer to win instant cash multiplier prizes; and a wild-triggered free spins round where all line wins are tripled. 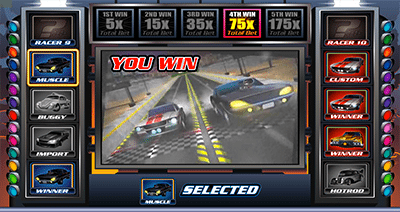 This is a true advanced video slot with 243 ways to win, multiple feature symbols and a maximum bet up to $90 per spin. The title symbol is a big-money wild that substitutes for all standard tiles, while the scatter pays from any position and triggers up to 30 free spins with a 5x multiplier when two appear on reels one and five.

What we love most about this game, however, is the interactive Bonus Race feature. Hitting the trigger symbols on the first and fifth reels unlocks a drag race side game where you must pick the winning car to progress through the levels and increase the win multiplier. Get all five winners right for a massive 175x total bet grand prize. 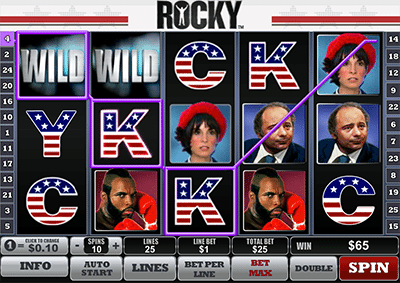 Inspired by arguably the greatest sports movie franchise of all time, Playtech’s Rocky slot game packs a hell of a punch.

We like the authentic character symbols and the classic gamble feature, but this game is all about the bonus rounds. Perhaps the cleverest is the Rocky feature, which pays five times the total bet when the letters R-O-C-K-Y (used in lieu of traditional royals) appear in that order on consecutive reels from left to right. There is also a free spins feature with up to 25 games on offer and a double multiplier on all wins.

But the cream of the crop is the Knockout Bonus, which starts when the white and red boxing gloves appear on the first and fifth reels respectively. Choose between Rocky’s greatest foes – Apollo Creed, Ivan Drago and Clubber Lang – and score instant cash prizes for every round the Italian Stallion wins. If there is a knockout before round 10, all remaining rounds are counted as player wins. 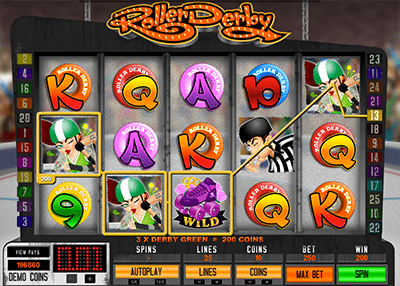 This is one of the more eye-catching internet slots to come out of the Microgaming studios in recent years. The visual theme is vivid yet grungy and the character animations are right on point, while the punky guitar riffs tie everything together when the reels are in motion.

As for game features, Roller Derby has a regulation five-reel layout with three rows of symbols and up to 25 win lines. There is a wild symbol that swaps with all characters and royals to create or improve winning combos, as well as a Roller Derby scatter bonus that triggers five free spins in which all the derby girls go wild. If you hit the scatter trigger again during bonus spins, you get another five games on the house.

Saucify Gaming has a few raunchy titles in its library, and this is certainly one of them. 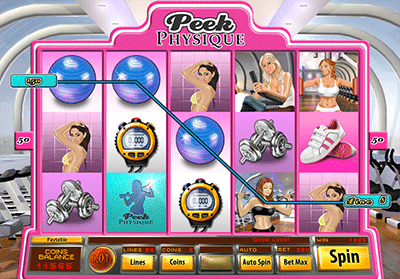 The Peek Physique online slot follows a group of female fitness junkees around the gym. They aren’t wearing much – sometimes nothing at all – and the animation sequences for some of the feature wins are sure to get a few motors running.

It’s not all sexiness over substance, however. Five video reels, 50 lines and four coin sizes create a variety of betting options, from a $0.01 minimum (0.01 x one line x one coin per line) up to a $62.50 max bet (0.25 x 50 lines x five coins per line). There is also a wild bonus and a scatter feature that unlocks up to 25 free spins with a triple multiplier.

Play all of these top online sports slots and over 1700 more real cash games at SlotsMillion.com, where new players can score a double deposit bonus up to $/£/€100 when making a deposit with real money for the first time.
Share On Facebook Share On Twitter