Ever dreamt of exploring the ocean floor and plundering hidden treasures from the lost city of Atlantis? That’s exactly what you get to do with this featured-packed gem from Net Entertainment, which continues to set the trend for innovative, immersive and feature-packed online slot games. Online punters can play Secrets of Atlantis now at our top NetEnt casinos for real money.

Where to play Secrets of Atlantis slots online

Secrets of Atlantis is a five-reel video slot with four rows of active symbols. That means there are 20 symbols in play at the end of each spin, rather than the 15 you get with a standard 5 x 3 reel layout. It also allows the game’s creators to cram in more paylines, of which there are 40 in this case.

Coin sizes range from $0.01 to $1, meaning you can bet as little as $0.20 ($0.01 coin on the lowest bet level) and as much as $200 ($1 coin on the highest bet level). That kind of scope makes the Secrets of Atlantis slot accessible to every kind of punter, from the first-time gambler to the high stakes slots veteran.

Unlike so many of NetEnt’s most popular slot releases, Secrets of Atlantis has no second-screen bonus round or scatter-triggered free spins. However, there are plenty of rewarding special features to be found in the main game. 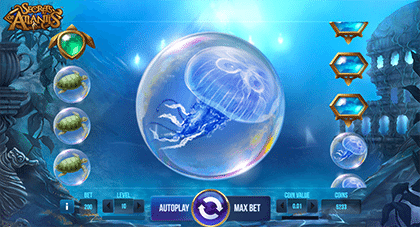 Highlight Feature – The second, third and fourth reels (i.e. the middle three) each feature strips of highlighted symbols. When all four positions are lit up on each highlight reel, a special bonus feature ensues.

Colossal Symbol Respins – When the middle three reels are fully highlighted, they all merge together to form one supersized reel. All symbols on the centre reel for the resulting respin become ‘Colossal’, covering all four rows at a time. 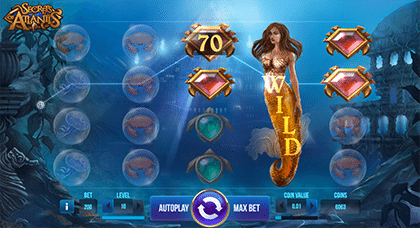 Nudge Wilds – Remember those old poker machines where you could nudge certain symbols into place at the end of a spin? That’s what you get with the Nudge Wild. If any part of the mermaid finishes in an active space, the entire wild symbol will shift up or down to cover all four positions on the reel.

Stacked Symbols – Just as the wild covers four rows at a time, standard symbols are stacked together in sequences of three, four, five, six, or even more. This gives you a chance to hit winning combinations with the same symbol across multiple paylines.

Win Both Ways – Most real money slot games only pay when a symbol combination starts on the leftmost reel. In Secrets of Atlantis, however, you can win whether a pattern begins on reel one (left to right) or reel five (right to left).

There are seven paying symbols in the Secrets of Atlantis slot game. The coin returns shown below correspond to the highest bet level (10).

As ever, you cannot fault the execution from Net Entertainment. It’s a beautiful game to look at, even if the layout is not quite as complex or original as some of the company’s other recent releases.

The set of slot features in Secrets of Atlantis work well together. The Nudge Wild is a super addition which, combined with symbol stacks and both ways wins, can create some seriously big winners. It would be even better if it was a paying symbol and/or a multiplier, but we can’t always get what we want. The Colossal symbols aren’t quite as potent as they seem, as their central position can actually be hindrance rather than a help, although they can go off in a very big way when they do hit the mark.

What the game lacks is a bonus round and a high-paying scatter symbol, but you can understand why NetEnt decided not to include such a features. Online casinos are in it to make a quid, after all, and Secrets of Atlantis already offers plenty of ways to hit a winner – and at up to $200 per spin, no less.

Give Secrets of Atlantis a spin for free in practice mode or for real money bets at any of the NetEnt casino sites listed in our casino table above, which have some excellent welcome bonuses for new players.
Share On Facebook Share On Twitter