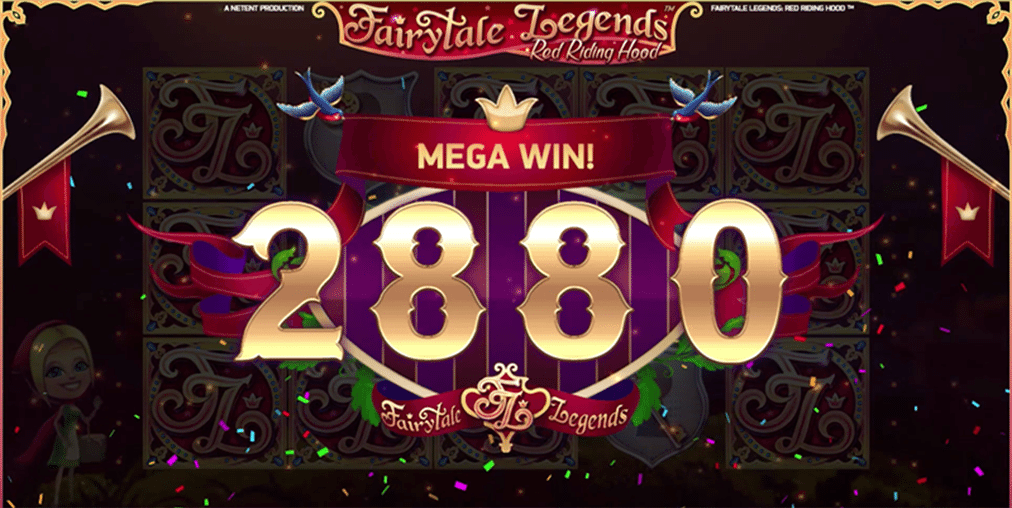 In its new Fairytale Legends collection, global gaming giant Net Entertainment has taken some of the world’s best-loved stories and transformed them into innovative slot games for online and mobile play. First in the series is Red Riding Hood, which boasts charming visuals and special features aplenty. Play it now for real money at one of our top-ranked casino sites.

Little Red Riding Hood is a non-progressive slot of the five-reel variety, with 20 paylines and a multitude of betting options to suit every player. You can choose your stake per line and how many lines you will play, with wagers starting at 20c right through to $200.

Once you have found a betting level you are comfortable with, prepare to enter the enchanting world which is Little Red Riding Hood, with charming graphics and sound effects aimed at making you feel like you are within the story itself.

The game is jam-packed full of special features with the aim of bumping up your payouts and ensuring you have the ultimate slot game experience. Transparent reels are set against an Autumn woods backdrop, with five high-value game symbols to watch out for being the Fairytale Legends logo, the key, the crown shield, the rose and the book. The lower values represented by the standard 10, J, Q, K and A royals.

Somewhat peculiar is that the game features no other characters from the story such as the hunter or the big bad wolf.

The wild symbol in the game is Little Red Riding Hood herself which appears on the second, third and fourth reels in the base game. If you spin two wilds they freeze where they land and become sticky for one free re-spin.

The treasure chest symbol is the scatter and appears on reels one, three and five. If you land three of them, you will be offered a choice of three exciting mini-games. 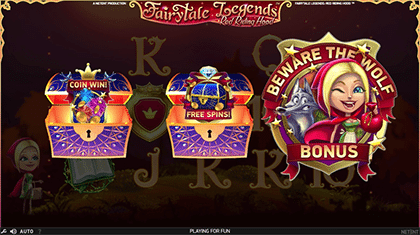 Beware the Wolf: Essentially like a board game where you move around by spinning the ‘whirligig’. Bonuses on offer in this game include multipliers, coin wins, and jackpot coin win where you can get up to 200x your stake. Landing on ‘collect’ ends the mini-game.

Free Spins: Gives you 10 free spins, with any additional chests awarding an extra two spins. If you can land three chests during this mode of the game you will be awarded 10 extra spins. The Little Red Riding Hood wild symbols can appear on all reels during this game and spinning at least two will freeze the wilds in place for one re-spin.

Coin Win: Pays out your total stake multiplied by 15x.

These features are completely random and happen during base game play. It involves an animated fairy (not that we can ever remember a fairy in the story, but if it means winning we won’t complain) who waves her magic wand to conjure up some nice rewards.

Fairy Magic Spin: Our little fairy will change a cluster of between five and nine symbols to a matching symbol, potentially creating a big win.

Fairy Surprise: The fairy selects one of the main symbols, with all lower symbols gradually transforming into that symbol until a win is achieved.

As a part of the NetEnt Touch range, Fairytale Legends: Red Riding Hood is available to play on your mobile phone or tablet device. We actually think the mobile version is better than the desktop version, but we will leave that up to you to decide for yourself. 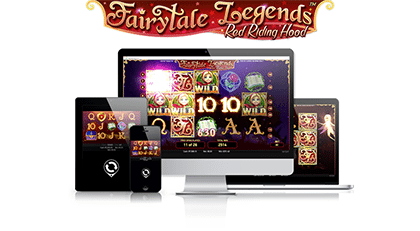 The Red Riding Hood mobile slot game has been formulated with an easy-to-use interface which encapsulates all the fun and excitement of the desktop version. With touch screen controls, the game has been specifically optimised to fit on the smaller phone/tablet screen, whilst the sharp sound effects also retain their quality through the mobile speakers. The mobile version also boasts exactly the same betting options and bonus features, ensuring you don’t miss out on any of the action available through the computer version.

Like all NetEnt Touch slot games, Red Riding Hood is fully optimised for all major browsers and mobile operating systems. Play it on your iPhone, iPad, Android, BlackBerry, or Windows Phone, for free-play or real money bets on the go.

Think Fairytale Legends: Little Red Riding Hood sounds like the game for you but don’t know where to play it? We have compiled a detailed list of our recommended online casinos, all of which offer a safe and secure betting environment and a lucrative sign-up bonus for new real money players.

G’Day: More than 500 games on offer and an unlimited welcome bonus on your first deposit.

SlotsMillion: Over 1700 slots to play online for real money, with a $100 welcome bonus.

This is yet another great slot game from the team at Net Entertainment, boasting a plethora of winning opportunities for gaming aficionados. The wide betting range makes it a great choice for everyday punters, with high rollers also catered for.

The game works well on desktop and is arguably even more captivating on your mobile screen, available to all iOS, Android and Windows users.

While it may never prove as popular as some of the progressive slots on offer, you still get the chance to win big through the wild and scatter symbols, teamed with the bonus round features.

Overall, this slot is definitely one to check out.