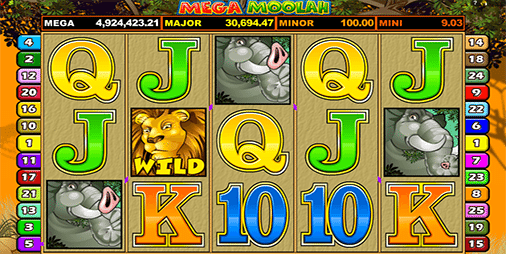 As the flagship title on the Microgaming Progressive Jackpot Network (MPJN), Mega Moolah is responsible for some of the biggest slot payouts in the history of online gaming. Find out why they call this special slot ‘the Millionaire Maker’, or head straight over to one of our top real money slot sites and have a crack at the famous Mega Progressive jackpot right now.

How to play Mega Moolah online

Whereas most progressive slot jackpots only come into play when you put up the maximum coin bet, Mega Moolah only requires that you select all 25 bet lines. However, the chances of striking it rich are much greater when you bet max coins.

How to win the Mega Moolah jackpots

The Mega Moolah slot games feature no less than four progressive prizes. A portion of every bet played on the Mega Moolah network worldwide goes into these global jackpots, each of which continues to rise until it is claimed.

The only way to win the Mega Moolah progressives is through a special bonus round that can be triggered randomly at any time during the main game. Here, the player spins the jackpot bonus wheel in the hopes of landing the Mega Progressive, which starts at a whopping AUD $1,000,000 and regularly soars into eight figures. Even if the Mega doesn’t go off, there are three consolation prizes on offer:

Some online jackpot slots are all about the progressives, but Mega Moolah has a few more strings to its bow. Besides a fixed in-game jackpot of up to 225,000 coins, it also boasts some very rewarding bonus features:

Mega Moolah was inducted into the Guinness Book of World Records in 2015 after a British soldier, Jon Heywood, pocketed a massive £13,212,188 jackpot – the biggest online slot payout ever registered. On average, the Mega Progressive pays over $4 million and goes off every 12 weeks, but both the frequency and the size of wins have increased sharply in recent times. Listed below are the top Mega Jackpot payouts in the game’s history, with all figures converted into Australian dollars.

One of the great things about Mega Moolah and the MPJN is the variety of games on offer. Mega Moolah Isis, Mega Moolah Summertime and Mega Moolah 5 Reel Drive all share the same progressive jackpots as the original, meaning punters can choose from various themes and gameplay features while searching for that life-changing win. The Dark Knight and Lord of the Rings online slots were once part of the Mega Moolah jackpot network as well, but Microgaming has since discontinued both games.

Online slot players can enjoy the Mega Moolah range on desktop, laptop and mobile at the trusted real money casinos recommended in our casino table above. This table has been geo-targeted to recognise your location and only recommend the leading casino sites accepting players from your country.