With Halloween just around the corner there’s no better time to fire up your favourite horror themed slots game and get in on all the thrills and chills of the creepiest time of the year. Some of the best game developers have used classic ghouls and horrifying characters as the basis for their games, so there’s plenty of spine tingling slots to choose from.

We’ve compiled a list of some of the best (and scariest) horror themed slots available on the Web. Just click on the images to preview the game in free-play mode at our top-recommended online real money sites, where you can choose to sign up and play for real cash later should you desire. 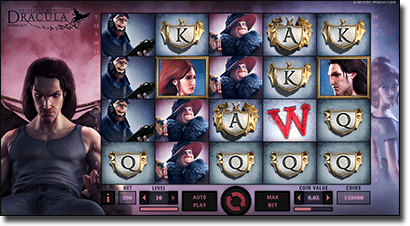 NetEnt’s Dracula was released towards the start of 2015 and was one of the most highly anticipated games of the year.

Using incredible cinematic grade animation, Dracula will send shivers down your spine from the moment the intro loads, with a harrowing video clip kicking off the game. The real horror lies with the Dracula character himself who sits alongside the reels during every spin, keeping you on the edge of your seat as you wait to see whether he’ll launch towards you when a winning spin is placed. The creepy bat feature allows Dracula to transform into a flock of vampire bats who swarm the screen to transform symbols. 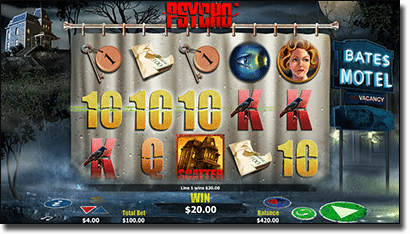 Psycho is a 2015 collaboration between Universal Studios and NextGen Gaming which continues the legacy left by the famous Alfred Hitchcock film of the same name.

While the symbols themselves are pretty harmless, the backdrop really sets a suspenseful scene, with the iconic Bates Motel symbol sitting to the right of the reels as an eerie thunderstorm rages on. To really experience the frightfulness of this game, play Psycho with the volume up; the soundtrack is scarier than any horror movie and will have you jumping any time you hear a noise in your house. 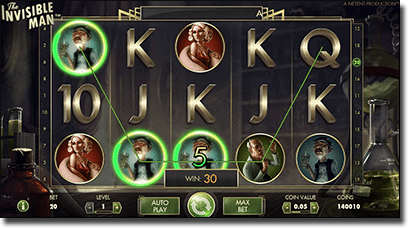 Another NetEnt title to make our list, The Invisible Man is as creepy as it is sophisticated. Based on the science fiction novel by H.G. Wells and subsequent 1933 Universal Pictures film, the game follows the story of a scientist who invents an invisibility drug which eventually drives him mad to the point of murder.

The Invisible Man has a bunch of great bonus features including free spins, with the Griffins Rage bonus game taking you to one of three different haunting locations where you click on mystery items to hopefully unveil a prize. 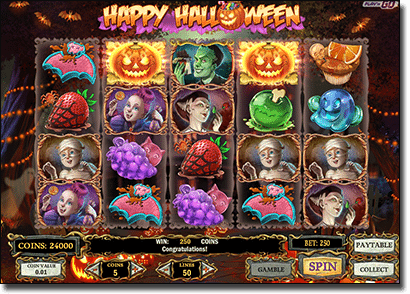 We couldn’t make a horror themed slots list and not include a Halloween themed game and Happy Halloween by Play’n Go is the best there is.

It’s more kitschy than scary, with symbols made up of iconic Halloween imagery like Jack-o-lanterns, ghosts, witches, Frankenstein and mummy’s while also staying true to the American tradition by dousing the game in candy and sugary treats. Happy Halloween features free spins, wild multipliers and a gamble feature.

Creature from the Black Lagoon 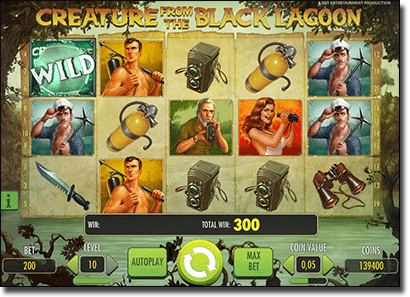 Another addition to the Universal Monsters range by NetEnt, Creature from the Black Lagoon is based on the classic 1954 horror movie of a group of scientists venturing into the jungle in search of a mysterious beast.

The game follows a vintage style true to the film and while the symbols themselves are pretty tame, the game features video sequences pulled from the actual movie which is where the real frightful element comes from. Along with the air of suspense provided by the dramatic soundtrack, you’ll be kept on the edge of your seat with the possibility of landing free spins and spreading wilds. 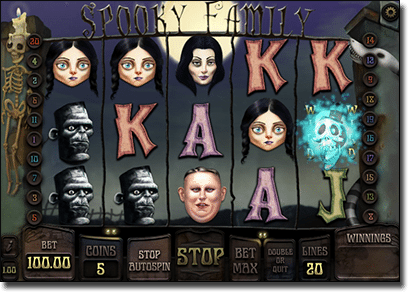 Spooky Family is an iSoftBet you’ll only find at Slots Million online casino and is a must play for any fans of the Addams Family. This game isn’t directly affiliated with the Addams Family, but there’s no disputing this is where the inspiration came from, with characters almost perfectly mimicking Lurch, Morticia, Gomez, Pugsley and Wednesday Addams.

Triggered at random, the “Darkness” skeletal hand will reach in from the grave to trigger a bonus which can award up to 10,000 credits in one hit, with a wild skeleton can float across the reels to turn other symbols to wilds.