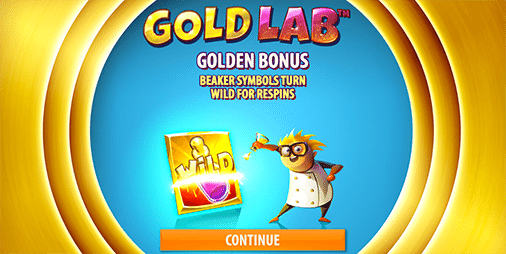 Bright, fun and full of features, Quickspin’s Gold Lab slots game is all about a young scientist and his attempts to transform everyday chemicals into infinite riches. Read on to find out more, or hit any of the links below to start playing for real cash at one of our top recommended instant play casinos.

How to play Gold Lab – bet limits and win lines

On the surface, the Gold Lab online slot looks much like any other video slot. It has a standard five-reel display with three rows of alchemy-themed symbols (elixir-filled beakers and precious gems) and there are 25 fixed paylines. Punters can choose from up to 14 preset bets, ranging from the minimum $0.20 to a maximum $200 per spin – great news for high rollers. There is also an autoplay feature that allows you to set stop losses and win limits for up to 1000 automated spins.

The Quickspin Gold Lab slots game features a high-paying wild symbol that can substitute for any other tile (except the scatter) to finish or lengthen a win line. That is one among 10 paying symbol types, alongside five gemstone varieties and four types of beakers. The payouts below are listed according to a $1 bet. 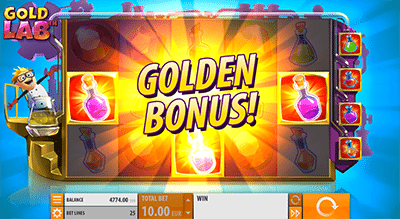 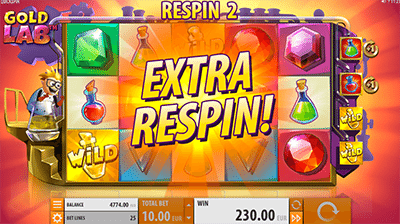 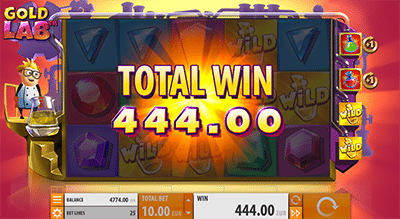 Most online slots games have some kind of scatter symbol, but Gold Lab offers a unique interpretation of this classic feature.

Each of the four beaker symbols (red, purple, green and orange) can take the guise of a Golden Bonus scatter, with a red background and gold trimming. Three or more matching Golden Bonus symbols on any spin in the base game triggers four respins and transforms all corresponding beaker symbols on the reels into fixed wilds for the duration of the bonus round. If another Golden Bonus feature appears at any point during the respins bonus, all other matching beakers turn wild and an additional free spin is awarded.

Unlike most scatters on real money slots games, the Golden Bonus tile can also act as a semi-wild feature. When only one or two of them appear (i.e. not enough to unlock bonus spins), they will change into standard beaker symbols that can combine with others on the reels and fill the gaps to complete or extend paylines. For example: if there are two purple Golden Bonus beakers, they will become regular purple beakers that can match with others to create extra wins.

It’s good to see younger online slots developers like Quickspin keeping up with Net Entertainment and the other big hitters when it comes to presentation and performance. The graphics and animations, while simple, are bright, clean and crisply drawn, matched with a jaunty and well-suited soundtrack that doesn’t burrow into the brain the way some other slots theme tunes do.

There aren’t many special features in Gold Lab, but we like what’s there. The transforming scatters make for an interesting deviation form the norm, while the retriggerable Golden Bonus respins with fixed wilds often pay over 30 times your initial stake. Combine that with a $200 max bet and a theoretical RTP over 96 per cent, and you get a real money slot that offers fun, simplicity and serious winning potential.