Developed by Rabcat Gambling and released in August 2016, Frozen Diamonds is a very cool addition to the ever-expanding catalogue of Microgaming online slots. Cascading reels and exploding symbols make for an all-action style of gameplay, while stacked wilds and re-triggered free spins offer plenty of incentive for the feature-conscience punter. Check it out for yourself at Jackpot City – our top rated and recommended Microgaming casino.

Frozen Diamonds uses a common 5 x 3 reel layout, but with an added twist. Whereas most video slots mimic the action of lever-operated mechanical slot reels, this one features dropping symbols that fall straight into place without spinning around and around beforehand. Besides the quirky cosmetic appeal, these cascading reels lead to some interesting gameplay benefits. 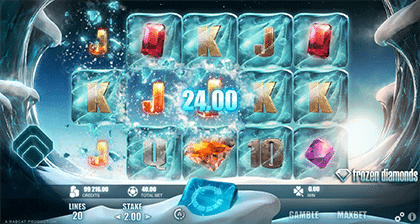 The key feature of the Frozen Diamonds base game is the ability to win multiple consecutive payouts on a single spin. This is made possible by Rabcat’s trademark Bonus Falls, which work much like the Free Falls feature on popular Net Entertainment slots such as Gonzo’s Quest.

Whenever you hit a paying combination in Frozen Diamonds, the winning symbols explode and vanish from the reels. This makes room for new symbols to appear while those already in play cascade down to fill the spaces left by the vanishing winners. It is possible to put together three consecutive wins in the main game (one spin and two Bonus Falls).

See the Bonus Falls tracker on the left side of the reels to keep track of your progress. When all three parts are lit up, even more bonus spins await.

Win on three consecutive falls in the main game to unlock the bonus round, where you will be randomly awarded either five or 10 free spins. Each free game features stacks of two or three wild symbols on the centre reel, thus creating more opportunities to hit high-paying combinations.

Probably the coolest aspect of the Frozen Diamonds bonus round is the ability to retrigger additional spins with consecutive falls. Bag a winner on the second Bonus Fall to score an extra free spin with a 2x win multiplier and a fixed wild stack on the third reel.

Frozen Diamonds features only nine different symbols, which is fewer than you will find on most modern-day Internet slots. There are four standard poker symbols (10, Jack, Queen, King), four gemstones of various colours and a standard wild that substitutes for any other symbol to complete a winning combination. All combos pay from left to right only, starting on the first reel.

There isn’t much to fault about the Frozen Diamonds slot game. The graphics are clean and engaging, the soundtrack is atmospheric and entirely free of annoying ear-worm hooks, and there is nothing glitchy or unsettling about the gameplay interface.

Selectable paylines and multiple coins per line would be a nice addition, while a $40 max bet is rather modest compared to recent releases from NetEnt and other leading slots developers. These are minor grievances, however, especially for a game of low-medium variance that is designed more for spare-change players than for the real high rollers.

We would also like to see a few more special features. The Bonus Falls are great, but do they make up for the absence of scatters, multipliers and alternative wilds in the main game? One might also say that a reward of five or 10 free spins feels a bit light for a game lacking in other bonuses, although the retrigger feature helps.