Loaded with unique special features and wonderful animations, Babushkas stands out as one of Thunderkick’s most entertaining real money slots releases to date. Find out what makes these Russian dolls as valuable as they are adorable, or click one of the links below to start playing straight away at one of our top online slots sites.

Where to play Babushkas slots online 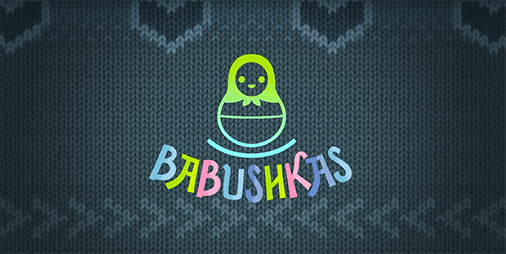 The graphics and animations are quite unlike anything we at RealMoneyCasinoSite.com have seen in an internet slot game before. Whereas as most titles are all about flashing lights and loud noises, the Babushkas slot features a collection of ornately drawn dolls laid over a remarkably tactile-looking crocheted wool design. It’s subtle, it’s different and it’s quite pleasing to the eye.

The game features a standard video slots layout with five reels, three rows and 15 active symbols per spin. There are 17 fixed paylines – an unusual number – with up to 14 preset betting options available:

One of the core features of the Babushkas slots is its innovative symbol set. The smaller the doll, the more it pays – so the outermost layer (the green baby doll) pays the least, while the innermost (the yellow grandma doll) pays the most. 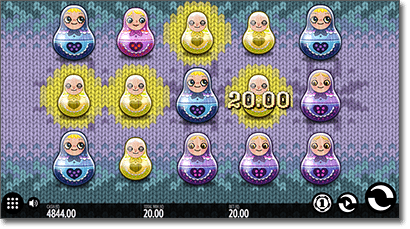 This arrangement paves the way for the unique Symbol Upgrade feature. If you hit a winning combination, each of those symbols can transform into the next highest paying doll in order to create new or longer paylines.

For example, let’s say we land three red dolls on consecutive reels from left to right, thus forming a payline. If there is a connecting orange doll that can either extend that existing win line or open up an additional combination on a new line, the three red symbols will turn orange to make one or more bigger combos.

Once the winning symbol upgrades begin, they continue until the paylines cannot be extended any further. When all 15 symbols in play are changed into the same type of doll, the Wipe feature triggers one extra upgrade for an even bigger win.

There’s even more fun to be had if you manage to fill the board with sleeping yellow grandma dolls. The resulting upgrade turns them all into ghost dolls, thus activating a special payout of 100 times your total bet.

On the centre reel (third column) is a wild feature that can substitute for any of the seven doll symbols to complete or extend a win line. If the wild shows a star when it comes to rest, a bear will emerge to trigger one of three Wild Mystery features: 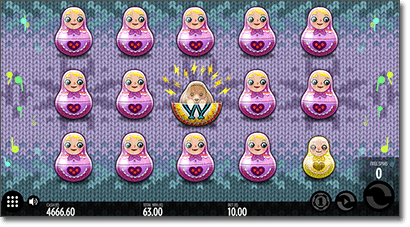 Thunderkick’s reputation for innovation has grown with every one of its latest slots releases. Babushkas shows just why that is.

The game’s look and feel are outstanding. The patterned woolly background, the Russian accordion music and the feature animations combine beautifully for an audio-visual experience that is at once charming, understated and highly enjoyable. Amongst the fun and the cuteness is an air of refinement you don’t get with many real cash slots games. 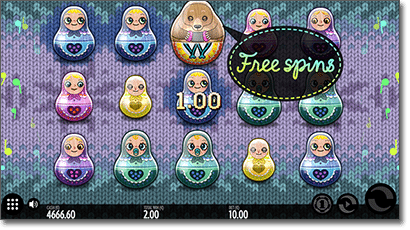 We also love the quirky special features. The Symbol Upgrade trick is a fine alternative to the cascading reels you see in the more advanced Betsoft, Microgaming and NetEnt slots, while the Wipe bonus offers some really big rewards. It would be nice if the wilds weren’t restricted to the third reel only, but the trio of additional features they can trigger makes up for that.

The only thing that sticks in our craw is the number of paylines. Why 17? Why not a nice round 20, or 25? It feels like the accounting department has stepped in and axed a few lines to bump down the RTP, which stands at around 95.4 per cent (still quite reasonable in slots terms).

That minor qualm aside, the folks at Thunderkick have hit it out of the park with this inventive, multi-faceted online slots game.