The Rugby World Cup has kicked off, and Guts are giving players the chance to win a trip to the grand final, spending cash and free spins too.

It’s easy to win – all players have to do is spin the reels of the new Rugby Star slot from Microgaming that was released this month at Guts.com up until October 4, which is perfect to play in between matches.

In order to win the main prize – a trip to the Rugby Wold Cup final on October 31 in London with $1500 spending money – you need to be the first player to unlock all of the in-game achievements on the Rugby Star slot on either the mobile or desktop version. 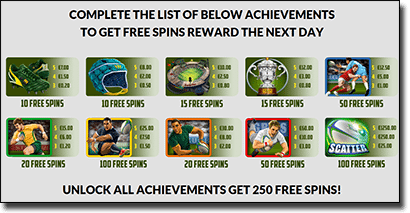 To unlock an achievement you need to spin winning combinations of at least three to five matching symbols on a payline. There are 10 different symbols, meaning you can unlock 10 different achievements.

If you manage to unlock all of the achievements you will also win 250 free spins.

Hurry to www.Guts.com now for your chance to be the first player to unlock all of the achievements and be rewarded with a trip to the Rugby World Cup final, or take your time and earn tickets into the prize draw that will take place on October 5.
Share On Facebook Share On Twitter