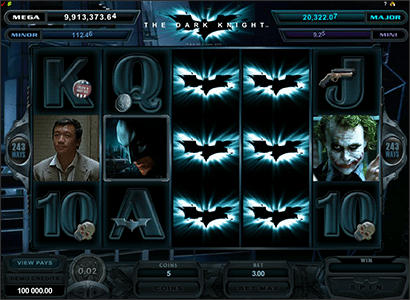 Australian pokies players can grab double rewards points at RoyalVegasCasino.com over the next fortnight as we bid a fond farewell to The Dark Knight.

Since replacing the discontinued Lord of the Rings progressive in 2012, the Batman-themed release has become one of Microgaming’s most successful and beloved online pokies games.

It is renowned for its 243-ways reels, rich graphics and immersive features, which includes real video clips from the 2008 blockbuster film starring Christian Bale, Gary Oldman and the late Heath Ledger.

The Dark Knight pokie is also linked with Mega Moolah on the Microgaming Progressive Jackpot Network (MPJN), making it one of the most lucrative casino games on the Web.

The Mega Moolah network’s Mega Jackpot holds the world record for the largest online pokies payout of all time – an incredible £13,212,882 (AUD $25.4 million) haul by Jon Heywood of the UK in October 2015.

The overwhelming success of The Dark Knight led to the 2013 release of The Dark Knight Rises – another feature-packed pokie with 243 ways to win, free spins aplenty and a unique bonus game where Batman and Bane go to town on each other. 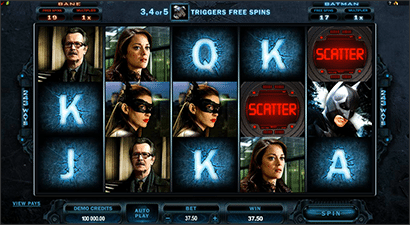 But all good things must come to an end, and now it’s time to say goodbye to both games as Microgaming prepares to launch a new series of high-profile licensed pokies.

Send them off in style at Royal Vegas, where you can score 2x loyalty points for every bet played on The Dark Knight and The Dark Knight Rises from now until their withdrawal on June 27, 2016.

Simply log in at the casino site, click on the ‘Good Night, Dark Knight’ promo message and start playing either game with real cash credits to maximise your rewards.