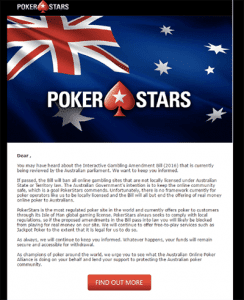 A number of secondary amendments were agreed to by the Senate yesterday, but exempting online poker from the Interactive Gambling Act 2001 wasn’t one of them.

The Interactive Gambling Amendment bill 2016 was introduced to the Senate in November and was finally debated during this week’s sitting.

Sports betting was the prominent focus and while it is still legal – and regulated – secondary amendments were agreed on to phase out gambling ads during live sporting events.

The bill was passed by the Senate and will now go back to the lower house where the new amendments will be considered at the next sitting. If it passes, the bill will be enforced.

As a result, PokerStars days are numbered.

A PokerStars representative commented on the legislative movements revealing the company is preparing to withdraw from the Australian market “within the appropriate time period.”

“Should it pass, Australian players will be able to continue to log in or play until we withdraw – and we will give clear guidance direct to our players on when that will happen,” the representative said.

“Our players remain a priority, and their funds will, as always, remain secure and accessible for withdrawal.”

They also revealed if the bill does pass, free to play products will still be available to Australian online poker players.

Senator Leyonhjelm spoke to the Huffington Post Australia following the debate, slamming the legislation as “stupid”.

“If you want to play poker, there are lots of opportunities in Australia, at casinos and tournaments,” he said.

“It’s not as if there isn’t a great deal of poker playing already, but they’re just stopping it online. The whole world is online now.”

He reiterated his advice, telling poker players to get a Virtual Private Network (VPN) and an offshore poker account.

“There is quite an active online poker community in Australia; I don’t think it will succeed for those really determined,” he said.

“If you have a VPN or offshore account, you will still play. It’s a stupid situation to be in.”

The controversial Senator also took to his Facebook page where he suggested online poker could still be saved and if there is enough support he will push for a committee inquiry.

Senators expressed they understood poker was of a different nature to online gambling games during the Senate debate.

Anti-gambling crusader Nick Xenophon even said comparing poker to online sports betting was unfair since the losses involved do not equate.

This could see a huge number of operators, not just PokerStars withdraw from the Australian market.

Big companies such as 888Poker already withdrew in January when things started to heat up.