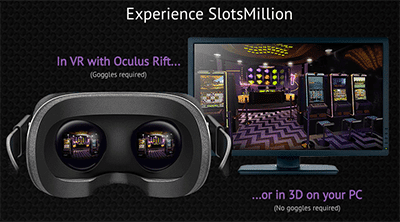 The groundbreaking platform allows punters from all over the globe to mingle and play real pokies games in a life-like and luxurious simulation of a land-based casino, complete with flashing machines and floor-to-ceiling windows.

It has proved to be a huge hit thus far, and not just with online pokies players.

SlotsMillion united live poker fans worldwide last month for the Cash Game Festival in Malta, which was streamed live on a big screen inside the VR casino.

It also hosted live feeds of the 2016 iGaming SuperShow in Amsterdam from June 7-10.

Speaking to reporters last month, SlotsMillion co-founder Alexandre Tomic said the virtual reality gaming experience had to be seen to be believed.

“Most people haven’t tried VR yet and it is hard to understand the strength of the immersiveness until you do so for yourself,” Tomic said.

“We are excited to be able to offer visitors to these shows the chance to have that experience.”

That includes a number of top titles from leading developer Net Entertainment, such as Cosmic Fortune, Gonzo’s Quest, Jack and the Beanstalk, Starburst and Twin Spin.

SlotsMillion recently added more than 60 pokies games from Pragmatic Play, many of which will be made available for the VR platform.

While the Oculus Rift goggles are required to experience SlotsMillion’s virtual reality pokies in all their glory, they can also be played without a headset.