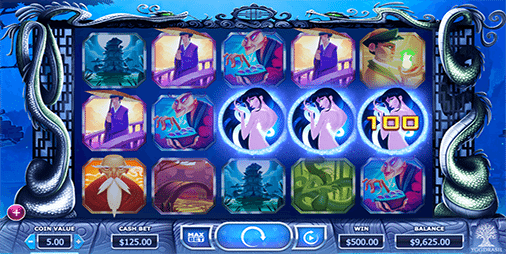 Leo Vegas Casino has this week added another gem to its dazzling array of real money pokies games for PC, Mac and mobile.

Legend of the White Snake Lady is the newest release from Yggdrasil Gaming – one of the fastest-growing software developers in the online casino industry.

Inspired by a popular tale from Chinese mythology, the game features an unmistakably Asian-influenced soundtrack and enchanting graphics with beautifully animated symbols.

The five video reels offer 243 ways to win, in both directions, while a delayed third reel adds extra suspense to every spin.

The middle reel also features locking wilds which, when included in a winning combination, remain in place while triggering re-spins.

A wide selection of coin sizes creates betting options for all types of players, while a $125 maximum per spin is sure to capture the attention of high stakes pokies players.

“We’re particularly proud of Legend of the White Snake Lady as it is a slot all about excitement,” said Fredrik Elmqvist, CEO of Yggdrasil.

“With the mesmerising music and glorious graphics, this is a game which really is the stuff of legend!

“There is some genuine innovation when it comes to this slot and I’m sure it will be enjoyed by our loyal fan base.”

The White Snake Lady online pokies game is one of several new releases from Yggdrasil, which has also launched hit titles such as Bicicleta, Monkey King, Wicked Circus and Seasons in 2016.

All are available now for real cash play at LeoVegas.com – our number one online pokies casino for Australian players.