Several of the world’s leading casino software developers are set to roll out brand new online pokies games in December 2016.

It tells the story of an ages-old battle for supremacy between the Barbarian, the Priestess and the Samurai, with different scatter symbols and free spins bonuses for each lord.

“An incredible amount of effort has gone into the creation of the game and the storytelling of Warlords: Crystals of Power,” NetEnt CPO Simon Hammon said in a press release.

“We are thrilled with the 3D graphics, soundtrack and gameplay, the result is simply stunning.

“Players will be blown away by the attention to detail, especially the animations and interactivity of the characters.

“We have really pushed the boundaries with this game, and are confident our customers and their end users will enjoy the result.”

Play’n Go will also expand its catalogue next month with the release of 7 Sins, which was officially launched on Thursday.

The new five-reel video pokie features 243 ways to win and a pair of distinct wild symbols, including a Double Lucky 7 that can create sevens of a kind.

It also has a scatter bonus that unlocks seven free spins with sticky wilds and a 7x multiplier.

Play’n Go chief executive Johan Tornqvist described the game as an ideal way to close out what has been a very productive 2016 for the Swedish developer.

“7 Sins is the perfect title to round off a fantastic 12 months for the company,” he said.

“However, 2017 looks set to be our biggest and best year yet and we can’t wait to get started.” 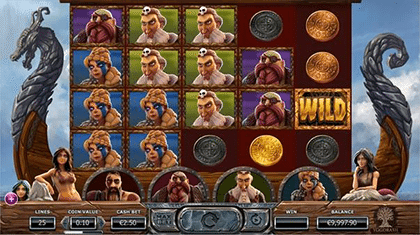 Not be outdone, both Quickspin and Yggdrasil Gaming will add new titles in the coming weeks to make it four fresh games from Scandinavia’s bustling software development sector.

Inspired by the legend of the burning bird, Phoenix Sun comes with a respin feature that adds new layers of symbols with each consecutive winner.

The shifting reel layout, adapted from Quickspin’s popular Crystal Queen pokie, gives players the opportunity to unlock up to six rows for a whopping 7776 ways to win.

Meanwhile, fans of Vikings Go Wilds will be treated to an exciting sequel that boasts new features such as Ragnarok Free Spins and a Rage Meter.

“Vikings Go Wild was a phenomenal success, so we wanted to continue their story,” said Yggdrasil’s Jonas Strandman.

“Vikings Go Berzerk takes things up a gear, and features the most mesmerising graphics we have ever produced.

“By sticking to the same maths model, we know players will enjoy the flow of the game, with new features adding to the excitement.”