Hook’s Heroes was anticipated to be rolled out at all Net Ent casinos on September 23, but it has hit Thrills.com today and we couldn’t be more excited. So if you were waiting patiently for the release, you’re in luck as you can play it with real money at Thrills online casino now.

If you’ve been dazzled by NetEnt’s August release, Dazzle Me, you’re excused for not knowing anything about the next big slot. 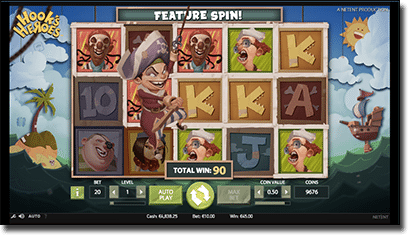 Hook’s Heroes is a pirate themed slot, with the video introduction suggesting it is a theatre production, that we guess is based on our least favourite pirate in Peter Pan and his crew. If you skip the intro however, you will be taken straight to the reels set on an animated backdrop that is constantly moving.

The new slot doesn’t follow what NetEnt have been doing lately in terms of the 4 row and 5 reels, rather it sticks to the 3 rows and 5 reels format, and features a standard 20 paylines.

Every spin is incredibly exciting, and we aren’t sure if it is because of the soundtrack and sound effects or that the randomly triggered, unique features are activated quite regularly.

Fairy Feature: We didn’t initially understand the addition of fairies with this slot, but if we stick to the theory it is based on a theatre production of Captain Hook from Peter Pan, we can link it to the fairy, Tinker Bell. This feature is definitely magical however, with two to five symbols turning Wild randomly to create huge wins.

Mermaid Feature: Mermaids make a little more sense here, and when triggered a random multiplier is applied to your winnings.

Pirate Feature: While Hook’s crew may be bad they’re heroes when it comes to this feature as all symbols will be paid out regardless if they are in the right position when activated. So even if you spin high value symbols in the wrong position for a winning combination you will still be paid.

These features are all quite unique and on top of these NetEnt have also included up to 15 free spins, which are triggered by three Scatter symbols. What’s more is you get to choose which random feature from above to be applied throughout the entire Free Spins feature, as follows;