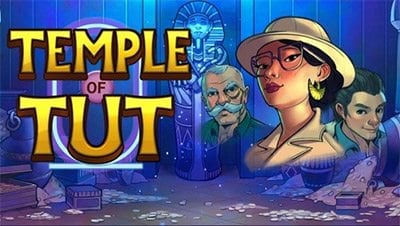 The first is Temple of Tut, a 10-payline slot with 5×3 reels where gamers can discover the treasures buried within the valued chambers of Tutankhamun. Paying both ways and offering free spins as well as Super Reels containing stacked wilds, this Egyptian-styled game will set players off in search massive wins.

Three brave adventurers will join the players in their quest for the fortunes of King Tut. These will serve as icons in the game, together with The Eye of Horus and other historical Egyptian artifacts.

The game contains a new function known as Super Reels, which has the ability to appear randomly in the base game and trigger big wins. The rays of light and golden scarabs have the ability to give as many as five Super Reels per spin, where every reel consists of 50% stacked wilds. Super Reels are usually active during free spins, when landing three scatters can unlock as many as 30 extra games.

“An Egyptian expedition within Pharaoh Tutankhamun’s chamber awaits players in Temple of Tut, a game that pairs stunning graphics with lively animations that bring the Super Reels feature and Free Spins to life,” said Tiger Holmgren, Chief Product Officer at Just For The Win.

Temple of Tut will go live with Quickfire and Microgaming operators from May 2nd, 2018.

The adventure goes on in Amazing Aztecs. Featuring 243 ways to win on a standard 5×3 reel layout, this game will take players back in time to a kingdom filled with unbelievable treasures.

Each win recorded in the Amazing Aztecs online slot gives the opportunity to activate the Giant Re-Spin function, where 4×4, 3×3 and 2×2 jumbo-sized symbols can trigger enormous wins.

“In Amazing Aztecs, players can journey alongside the Chief, the Hunter, the Shaman and the Princess in their search for legendary wealth,” said David Reynolds, Games Publisher at Microgaming.

“The game is brought to life by rich animations and vibrant graphics, combined with a frequently occurring Giant Re-Spin feature to spark thrill in every spin!”

Amazing Aztecs is scheduled to land at Quickfire and Microgaming operators on May 31st, 2018.