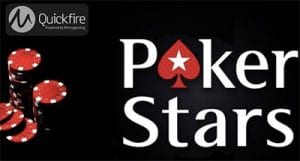 Popular online casino developer, Microgaming, has teamed up with PokerStars to offer its range of online slots.

Some of the best titles from Microgaming are available at PokerStars Casino, where players can play the slots among other real money gambling games.

Amid the range of games is Mega Moolah, the popular progressive which has made a number of players millionaires all around the world in recent years.

Amaya revealed the partnership in February, announcing the addition of Microgaming games to its catalogue via the Quickfire platform.

The games can be accessed on smartphones, tablets, desktops or laptops.

Director of Quickfire at Microgaming, Andrew Clucas, said the addition of Microgaming’s titles is a “great achievement”.

“They (PokerStars) are a renowned gaming brand with a huge player base, and we believe Microgaming content is the perfect fit for their casino customers,” Clucas added.

“We will continue to work closely with PokerStars as they look to grow their games portfolio through Quickfire.”

Director of PokerStars Casino Operations, Bo Wänghammar, said Microgaming’s casino games are some of the most favourable “in the online casino industry”.

“This partnership, alongside bespoke games developed by PokerStars, will help provide our customers with the best online gaming experience that can’t be found elsewhere,” he added.

“We look forward to further expanding with Microgaming in the near future.”

Mr Wänghammar may be referring to an expansion into Microgaming’s table games and even casual games in the future.

As mentioned when the partnership was announced, PokerStars appears to be moving its focus from poker to online casino gambling games.