Want a reason to make the switch to playing pokies online instead of dragging yourself out in the cold to play in a stale old pokies lounge? We could give you about eight million of them. That’s the larger-than-life figure currently up for grabs through the Microgaming progressive jackpot network’s most popular title Mega Moolah, an online slot game that’s been no stranger to monumental wins in the past.

As of Monday morning July 20, the Mega Moolah mega jackpot was sitting at a hefty £8,094,313 and growing bigger and tastier by the minute as hopeful punters from all over the world flock to their favourite online casinos to get in on the action.

It’s been ages since an Aussie struck it rich on Mega Moolah, so the team at RealMoneyCasinos.com.au have our fingers firmly crossed that a fellow Australian will be the one to take in this incredible prize pool. To secure your place in the multi-million dollar running, we’ve filtered out the best and safest online casinos offering Mega Moolah spins in AUD: 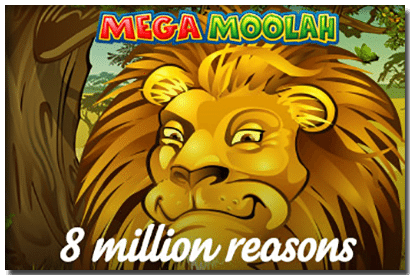 Click on the links above to sign in or register for a new account and deposit funds to get spinning but be quick, the mega jackpot could be won any second now.

On average, the Mega Moolah jackpot is triggered around every 73 days, but this one’s been building up for over 100 days, causing the jackpot to soar to record new heights.

With a majority of our recommended casinos also offering Mega Moolah for iOS and Android mobile play, you can give it a crack on your smartphone or tablet to keep playing on the go in hope the winning spin will be yours.

What is Mega Moolah?

If you’re new to the game, Mega Moolah is a progressive jackpot pokies following a fun African safari theme using reels filled with cheerful animals from across the Savannah. The game offers four base jackpots ($10, $1,000, $10,000 and $1,000,000) each of which grows higher anytime the game is played anywhere across the Microgaming progressive jackpot network. 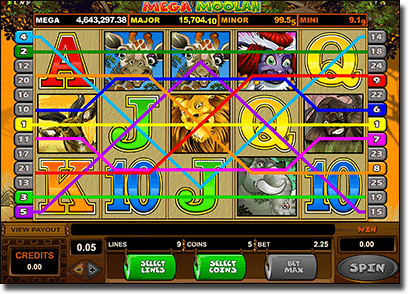 Given the popularity of this game, it doesn’t take long for the base jackpots to climb and the bigger they get, the more players come running and the higher the jackpots continue to grow. It’s a beautiful cycle and is what online gambling dreams are made of.

Triggering the jackpot round within Mega Moolah will bring you to a wheel-of-fortune style game displaying each of the jackpots. All you need to do is spin the wheel, hold your breath and pray that fate is on your side and the eight million bucks could be yours.

There’s a reason why Mega Moolah has been touted as The Millionaire Maker. This game is responsible for more life changing wins than any other progressive jackpot slot game. Here’s a sample of some of the biggest recent Mega Moolah wins:

The biggest ever Mega Moolah jackpot was won by UK player John Orchard in October 2012 when he scored himself a sweet £5.88 million (AUD $11.24m) so this round is about to blow John’s record well out of the water.

Want to add yourself to the top of the list of winners? Follow the links to our recommended AUD casinos now and join the Mega Moolah frenzy.