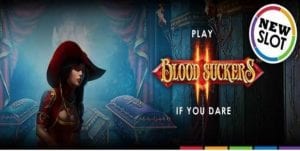 Slots Million is getting into the Halloween spirit by offering new players an extra 50 free spins to use on software provider NetEnt’s vampire themed slot game, Blood Suckers II.

From October 16 to October 30, new players who sign up for an account and make a real money deposit of at least €20 will get an extra 50 free spins on Blood Suckers II by entering promo code BLOOD50. These free spins are on top of the existing welcome bonus, which gives new players a 100% matched bonus on their first deposit along with 100 free spins to use on selected NetEnt games.

The original Blood Suckers slot was such a mega-hit that NetEnt released a sequel earlier this year, where players join a young vampire named Amilia on a quest to find the hidden treasure of her ancestors. To do so she must cross through all kinds of different chambers and bonus stages, adding a lot of excitement and winning potential to each spin. If you haven’t tried this game yet, now is the perfect opportunity at Slots Million.

Slots Million has a strong commitment to releasing new games every week, so there’s always fresh content available even for regular players. Check out some of the hot new titles that are unveiling at Slots Million over the coming week:

The total game count at Slots Million desktop has now reached over 2,000 (although you may not have full access to the game catalogue depending which country you’re playing from), making it the largest online casino of all our top-rated casino sites.