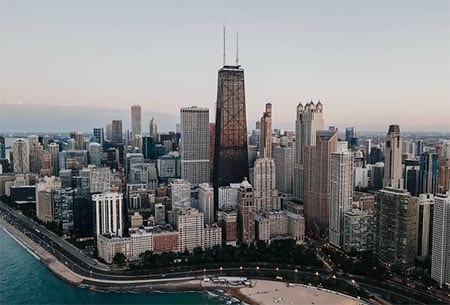 The Illinois General Assembly has approved legislative changes that would lead to a massive expansion of the state’s casino industry.

The gambling reform bill was sent to Governor JB Pritzker on Sunday and is expected to become law within a matter of days.

Under the new regulations, existing Illinois casinos will have the freedom to add up to 70 per cent more slot machines, table games and other betting facilities.

The state will set aside licences for six new casinos, with one reserved for a landmark development in Chicago.

That will end the ban on casino gambling in the Windy City and make it one of the first major US cities to embrace gaming and wagering.

Whichever firm wins the Chicago casino licence will also have the right to operate slot games at the O’Hare International and Midway airports.

Illinois racetracks will have greater gambling powers, including the ability to run slots and table games, while sports betting will become legal statewide.

“The next step here for the bill is for Governor Pritzker to sign it, and given he has been supportive of expanded gaming thus far, this is probably a done deal,” said Joseph Greff, an analyst at JPMorgan Chase & Co.

The reforms are a blessing for not only the gamblers of Illinois, but also the American gaming industry as a whole.

The increased demand for slot machines in the Prairie State will give a shot in the arm to game manufacturers such as Scientific Games, whose share price went up 9.4 per cent on Monday.

Meanwhile, the advent of online sports betting is expected to benefit the likes of Boyd Gaming, Caesars Entertainment, Eldorado Resorts and Penn National Gaming, all of which operate casino properties in Illinois or nearby Indiana.