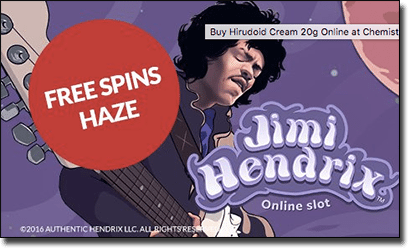 Net Entertainment are doing the final sound check this week before the highly anticipated release of the new Jimi Hendrix pokie on April 21, and to celebrate Guts are offering players three days of free spins.

Guts Casino are preparing their fans with a three day Guts Rock Festival, which will see players earning free spins for the new Jimi Hendrix pokie release, which may fix any Coachella blues.

Running from April 18 until April 20 at at 23:59 CET players can earn their free spins by wagering on the incredible Guns N’ Roses pokie, as follows:

You will receive your free spins for Jimi Hendrix on April 21 at 15:00 CET – so be sure to look up the time differences, including for the qualifying period so you don’t miss out.

If you manage to win big on Guns N’ Roses you can also wager this and have it count towards the larger free spin prizes since the free spins are based on the cumulative value of wagering during the qualifying period.

The best part, however, is the free spins for the new Jimi Hendrix pokie are wager free.

What’s different, however, is Guns N’ Roses took a full year to be released, while we are getting the Jimi Hendrix pokie this week – just two months after the reveal.

From the release of Guns N’ Roses we can guaranteed Jimi Hendrix will feature HD quality graphics and incredible animations to tie in with the theme. Since Hendrix excited the audiences in the 1960s, the title relies heavily on a 60s psychedelic theme. The attention to detail to the theme will no doubt be executed to the tee by NetEnt.

When it comes to the features, we can only expect the best – especially basing off what we we have seen in Guns N’ Roses.

Jimi Hendrix is the second installment from Net Entertainments’ cutting-edge ‘NetEnt Rocks’ trilogy – with the third and final release based on the incredible rock bank Motorhead (set to be released in September).

Additionally, it will be available to play on both desktop and mobile devices – with the free spins eligible to be used on either platform.

Guts recently added mobile live dealer games to its platform, so there’s never been a better time to check out the casino and get in on the action.

If you aren’t a member of Guts.com yet, click or tap to sign up and get rocking on Guns N’ Roses to win your Jimi Hendrix free spins.

For even more fun this month, try your luck at Leo Vegas Casino’s Treasure Hunt to get your hands on some sweet cash prizes.