To win your share of $100K at Leo Vegas Casino, simply play the new video pokies, Starburst between these dates.

If you’re a registered player at Leo Vegas, chances as you’ve taken the popular online pokies Starburst for a spin or two, as Leo Vegas offers free spins on Starburst to new players upon making their first deposit. 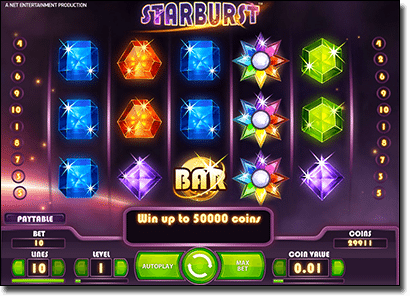 Starburst may not be the most innovative slot game on the market, but it’s definitely a fun, vibrant and visually stimulating online pokies experience, with sparkling jewels cascading across the screen to an airy soundtrack.

To be in the running to win one of these awesome cash prizes, it’s as easy as playing Starburst at Leo Vegas for real money wagers. For every $1 bet that you place, you’ll receive one entry ticket to the Starburst Festival raffle. A list of the top 50 ticket earners is updated daily and displayed onsite, so you know exactly where you stand against your competition.

The player with the most tickets each week will automatically take home the $2,500 cash prize, while the overall winner at the end of the promo receives an incredible $10,000 reward. The top 100 players will also receive additional cash prizes, and each player who wagered at least $1 goes in the draw each week for real world prizes including iPhones, iPads and iWatches.

Each week all players who place at least $30 in wagers on Starburst also win five free spins credited to their account every day for the duration of the promotional period.

Head to LeoVegas.com before the 22nd of June and join the Starburst showdown for your chance to be $10,000 richer.

Also, don’t forget to head to Guts Casino before the 27th of May for your chance to win a trip to Dubai.